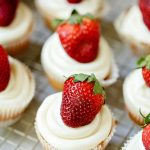 These strawberry cheesecake cupcakes are the perfect sweet treat to make for baby showers, bake sales, or just dessert at home. Everyone will love these sweet and tangy cupcakes!

Line 24 muffin cups with paper liners and set aside.

Separate the egg whites and let it sit out at room temperature for about 30 minutes. This helps it whip up better.

In the meantime, mix the graham cracker crumbs, sugar, and butter until fine crumbs form. Use a food processor for even finer crumbs, but it’s not required. Put approximately 1 tablespoon into the bottom of each muffin cup and press down. Bake at 350 degrees for 3-5 minutes or until lightly browned. Set aside to cool.

After 30 minutes, whip up the egg whites until stiff peaks form. Remove into a separate bowl.

In the large mixer bowl (you just removed the egg whites from), cream the butter, sugar, and vanilla.

In a separate bowl, combine the flour, baking powder, and salt; add to the creamed mixture alternately with the sour cream, beating well with each addition. The batter will be dense.

Fold one third of the whipped egg whites into the batter. Gently fold in the remaining egg whites and strawberries.

Fill muffin cups three-fourths full. Bake at 350 degrees for 18-22 minutes or until a toothpick inserted near the center comes out clean. Cool for 10 minutes before removing from muffin pan to a wire rack to cool completely.

For the frosting, beat the softened cream cheese and butter until fluffy. Gradually add about 4 cups of confectioners’ sugar and vanilla; beat until smooth. You may need to add a tablespoon or two of milk, depending on the density of the frosting (which may vary, based on how softened your cream cheese was.) Add the milk and/or more sugar gradually until the frosting is at an ideal consistency. Frost the cupcakes. Garnish with strawberries.