I’m always looking for a way to keep my kids entertained, particularly in those long winter months when it’s too cold to be outside and we’re all getting just a touch of cabin fever. One of my favorite winter activities to keep the boredom at bay is to make homemade snow slime! It’s simple to put together and will provide hours of fun.

My kids love making homemade slime, otherwise called homemade Gak. It’s a simple recipe that provides hours of fun. Recently, my kids wanted to try something different, so we decided to make snow slime with glitter. This pretty homemade slime is white and sparkly like snow. Unlike real snow, it won’t melt all over your house, however!

Homemade glitter slime has a super cool texture. It’s not like playdough or other common things around the house. While kids can mold it into a ball, it won’t stay that way; it will slowly spread out into a slime “puddle.” It’s the weirdest thing and completely fascinates my kids. Every time.

Not only is snowflake glitter slime super fun, but you can make a batch in just 5 minutes! And it’s so easy to make that my 6 year old, Joshua, made this batch all by himself (with my supervision, of course.)

The other great thing about homemade slime is that it’s a nice sensory tool if you have sensitive kids. My 12 year old, Nathan, has autism and sometimes gets overwhelmed. Handing him a baggie with glitter slime (or even the regular version) helps him calm down and focus on something besides his frustration.

How to Make Snowflake Glitter Slime:

Glitter slime is just as easy to make as the original slime recipe, the only difference is you add silver glitter.

Here are the ingredients you’ll need for this snow slime recipe:

I love this fun winter activity because the recipe and supplies are simple. No contact solution or homemade saline solution is needed for this craft!

First, add 1/2 cup of water to a small bowl or container, then squeeze the entire 4 ounces of glue into the water. If you are making this together with a child, this is the perfect part for them to help with!

Then, have your helper mix the glue and water with a spoon.

Next, it’s time to add the sparkle! Sprinkle the glitter into the glue and water mixture and mix. Use as much as you want.

Set aside the glue mixture.

In a separate container, dissolve 1/2 teaspoon of Borax into 1/4 cup hot water.

Mix well, and then mix again. Keep stirring until the borax is completely dissolved.

This is the most important step – if even a tiny bit of borax is still visible, the slime will not form. So, keep stirring!

When the borax is completely dissolved, you can pour the borax/water mixture into the glue mixture. Begin stirring.

The mixture should begin to form around the spoon.

…until the liquid is mostly gone and the slime is really balling around the spoon. As you can see from these images, the winter slime is nice and fluffy!

Now you can set aside the spoon and let your helper work the slime with their hands.

As your child pulls and works at the slime, it will finish mixing everything and fully form. See why this is a great DIY to do with a helper? 😉

If you want to add more glitter, go for it. I personally like to keep the glitter as minimal as I can, but I have some friends that prefer the opposite!

You can split one batch of snowflake glitter slime between two kids, but I prefer making a separate batch for each child. Since it’s so quick and such an easy recipe (and my older two children who are 9 and 12 can make their own), it’s simple enough to do and allows everyone to have their own fluffy snow slime recipe to enjoy.

FAQs About This Craft

Even though this may seem like a messy activity, there’s actually very little mess. This is because slime likes to stay together. It doesn’t fall apart like old playdough tends to, so you don’t have to worry about cleaning clumps of it off your floor.

That being said, I tend to limit where my kids play with this, just in case. We usually do slime at the dining table or kitchen counter, rather than a soft surface like a couch or rug.

Do I have to use borax?

Yes, this recipe requires Borax; without it, you won’t get the “slime consistency”. Thankfully, it is easy to find! You can grab Borax near the laundry boosters in the store, or simply order online.

How long does homemade slime last?

When properly stored, our glitter slime has often lasted for over a month. I’m not aware of an “expiration” date. It’s an indoor activity you can enjoy again and again. 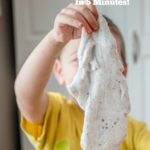 This fun recipe takes just 5 minutes to make and is so easy, kids can help make it!

*Make sure you 100% dissolve the borax in the water before adding to the glue or the recipe will FAIL!