These vegan buckeyes are everything you want them to be—rich, chocolatey, and full of flavor. Plus, they also happen to be paleo buckeyes too, with no added sugar! Make these and the entire family will be clamoring for a bite.

Buckeyes, a chocolate-covered creamy peanut butter ball, are one of the most amazing dessert recipes. Like ever. Peanut butter and chocolate all wrapped up into one little ball? Yes, please! 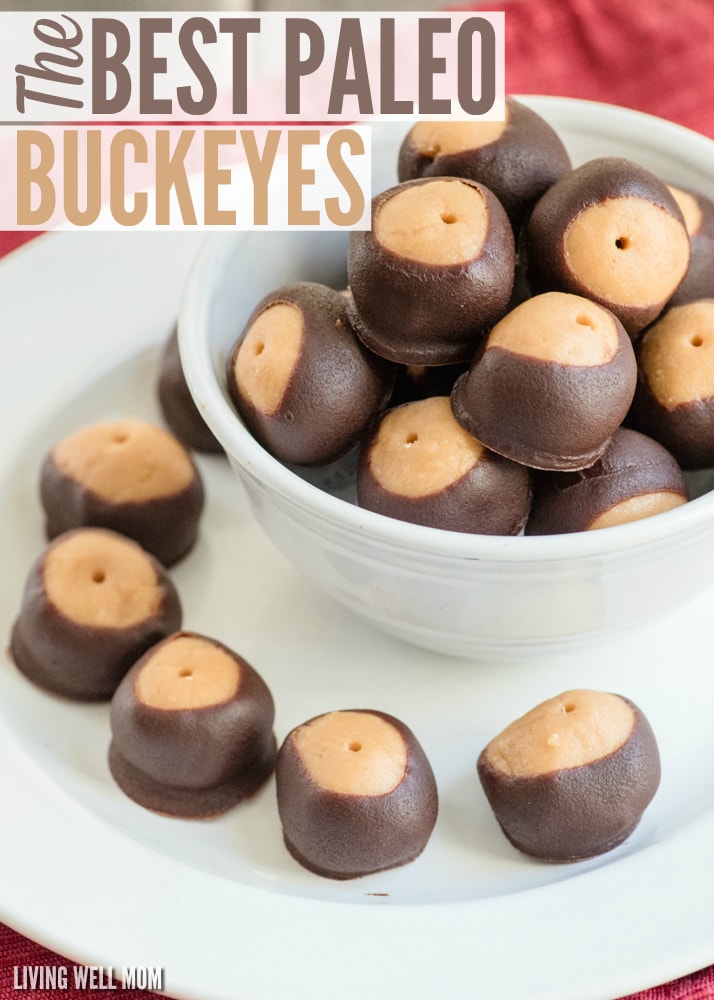 I’m originally from Ohio, known as the “Buckeye State,” which is where these treats originated from. In fact, I’ve been making buckeyes every Christmas since I was a little girl. But I’m on the Paleo diet now, which doesn’t allow refined sugar, dairy, or peanuts.

For a while, I thought this meant saying goodbye forever to my beloved buckeyes! Thankfully, I got a fire lit under me and decided I was going to make the most delicious, tasty paleo vegan buckeyes ever. Was it going to be a challenge? Yes. But was I up for it? YES!

So, this season, I set out to create the most awesome Paleo Buckeyes recipe ever. I spent hours trying different combinations for a recipe that mimics the original version as closely as possible. Because I know what the real stuff tastes like and I have very high standards. And this, my friends, is the result.

I give you my paleo buckeyes recipe: 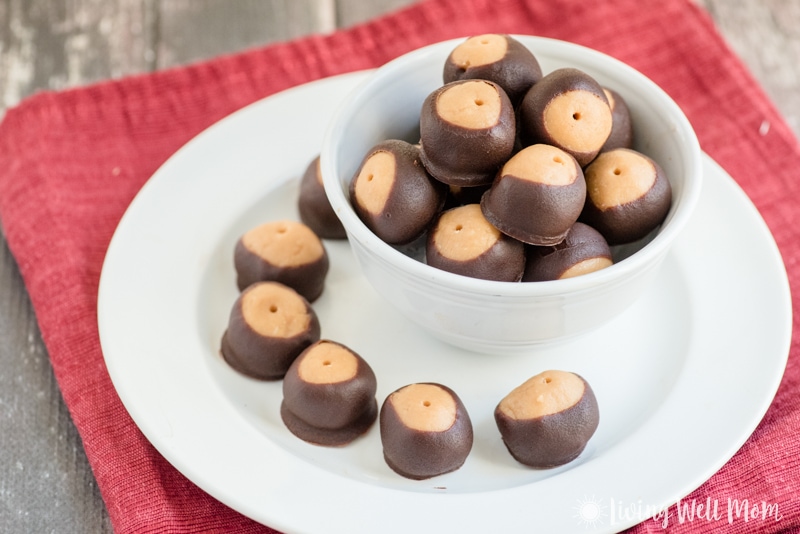 These creamy little vegan paleo buckeyes are chocolate balls are made with almond butter, coconut butter, and a few other simple ingredients. And they are delicious. So delicious, they disappear just as quickly as the original version. 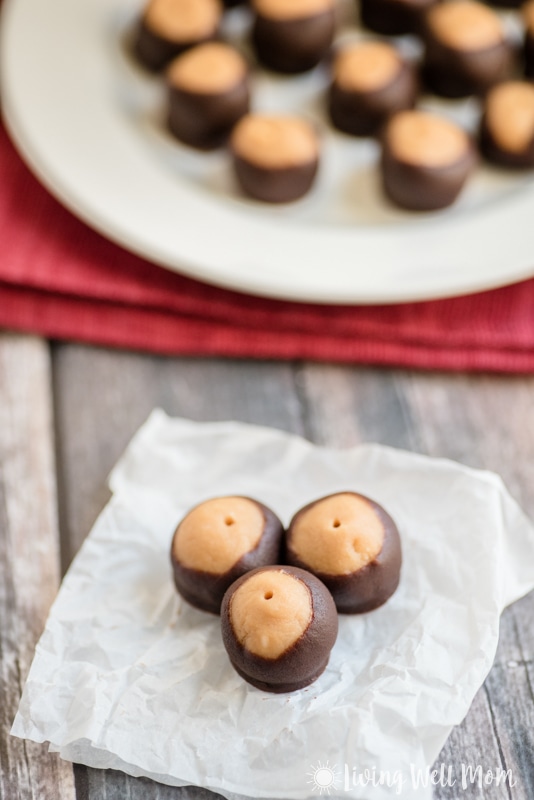 Paleo Buckeyes are grain-free, gluten-free, dairy-free, and refined-sugar free. Even if you’re not on a paleo diet, these are a lighter healthier take on the original recipe that you can enjoy with far less guilt. And while it’s impossible to create a Paleo version that tastes exactly like the sugar-filled original version, this recipe is pretty close.

This Paleo Buckeyes recipe has been given the stamp of approval from family and friends. Even my picky kids begged for more. My husband? He has been so good about portion-control and eating healthy lately, but he couldn’t resist eating 6 of these little chocolate balls at once! {That may be the one downfall to these treats.} 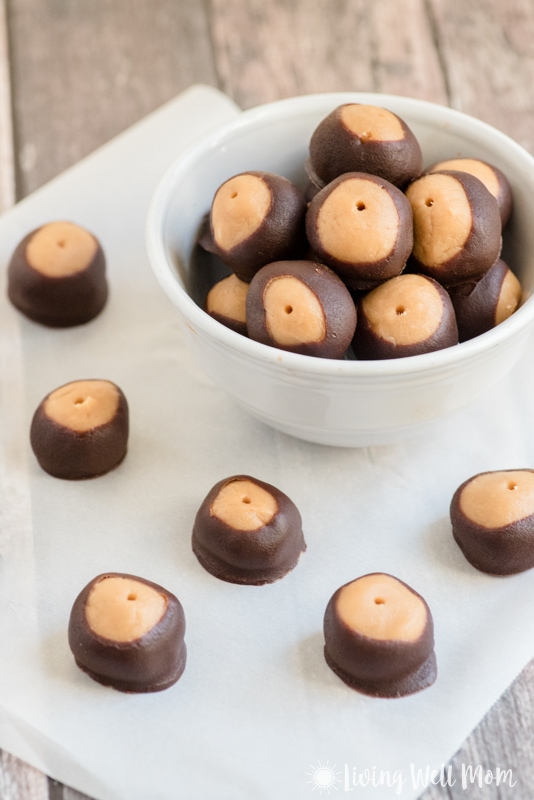 Are you ready to get to work and make some paleo buckeyes of your own? I’ll walk you through it! Here’s all you need to know to make a batch of delicious buckeyes.

For the chocolate coating

A quick note here – you can make a lovely homemade version, or see my “cheat” method below.

If you want a lighter look and taste to your Paleo Buckeyes, I recommend using these brands (not sponsored) for this recipe: 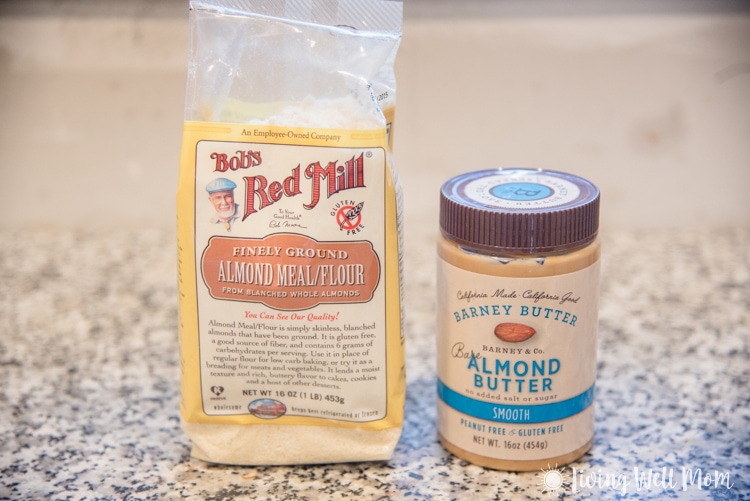 Peanut butter isn’t paleo-friendly since peanuts are actually legumes, not nuts (despite the name!). So, I wasn’t able to make this with the classic peanut butter-chocolate combo, but I honestly think this almond butter is just as good!

had the closest look and feel to peanut butter. I found that the others that were darker and a bit heavier tasting. That being said, you can use whatever almond butter you prefer. Same for the Bob’s Red Mill Finely Ground Almond Meal/Flour.

How to Make the Paleo Buckeyes

These Paleo Buckeyes are super easy to make. Melt the coconut butter over low heat (or in the microwave), then put all the “ball” ingredients into your food processor. (You can use a mixer or even mix by hand, but your food processor will be quickest with the smoothest results.) 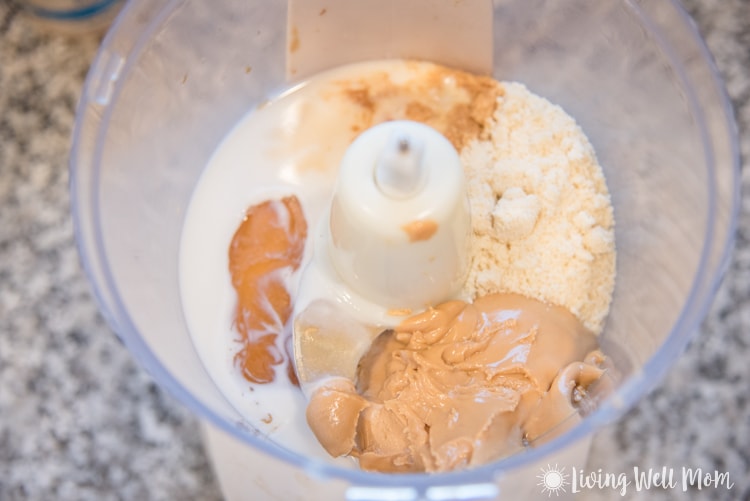 Pulse until well blended, stopping to scrape the sides as needed. 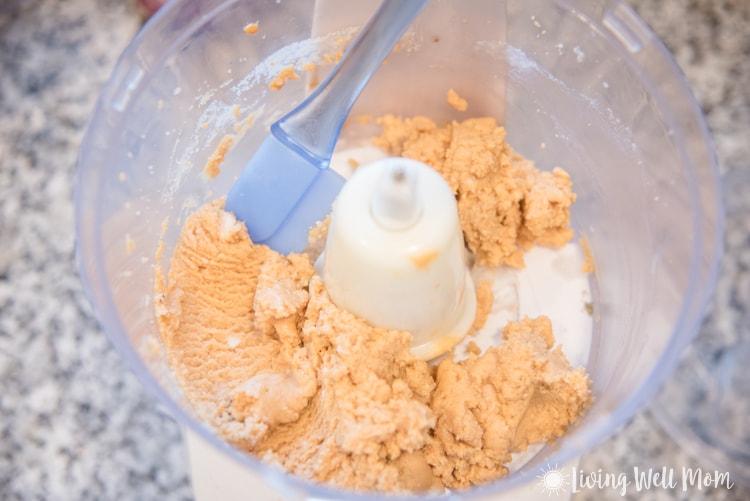 Roll into small 1″ balls and place on a baking sheet covered with parchment paper. This recipe makes about 30 balls. 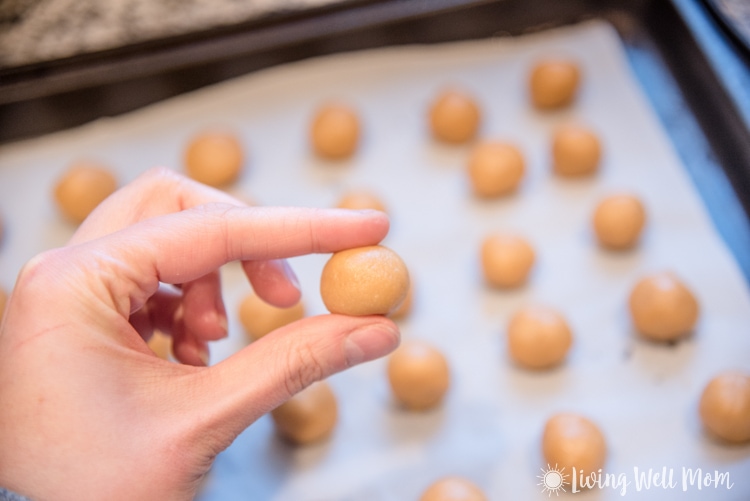 Stick a toothpick into each ball for dipping into the chocolate later.

For the homemade chocolate coating:

for a recipe like this, but I decided to try something a little different. I came up with a homemade chocolate coating that’s less-expensive than dairy-free, soy-free chocolate, plus it’s very easy to make.

Simply melt the coconut oil over low heat then add the cacao powder and maple syrup. 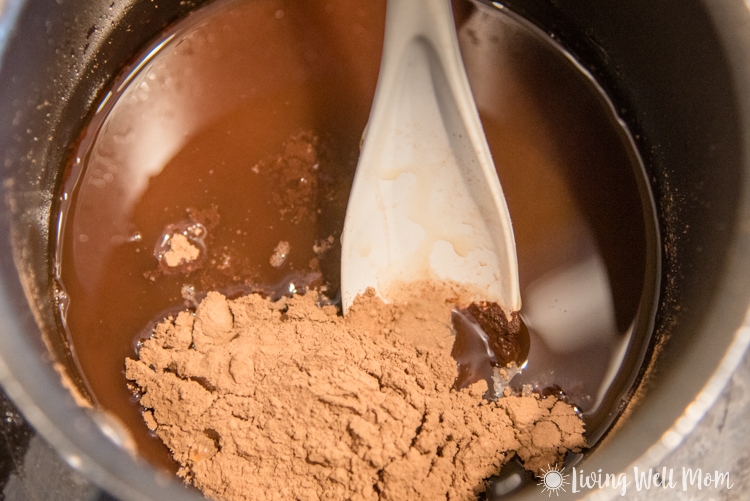 Then stir (or whisk to remove any lumps) and taste it to see if it’s sweet enough for your liking. If you want a little more sweetness, you can add a few drops of stevia. Otherwise, it’s ready to use. 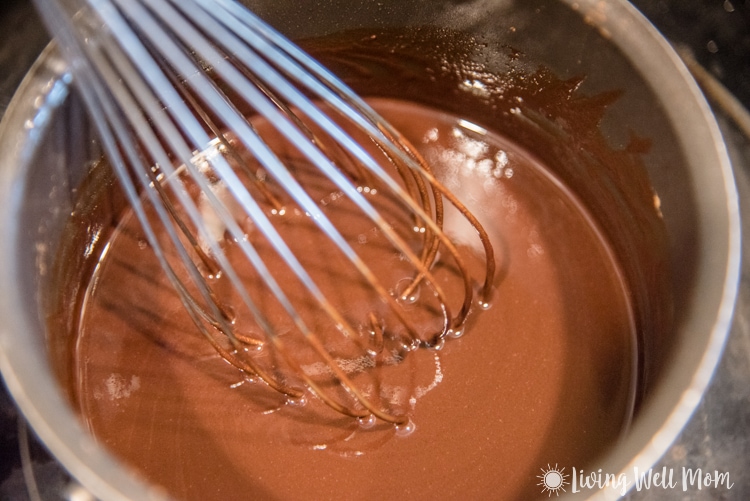 Next, dip each almond butter ball into the chocolate using the toothpicks. 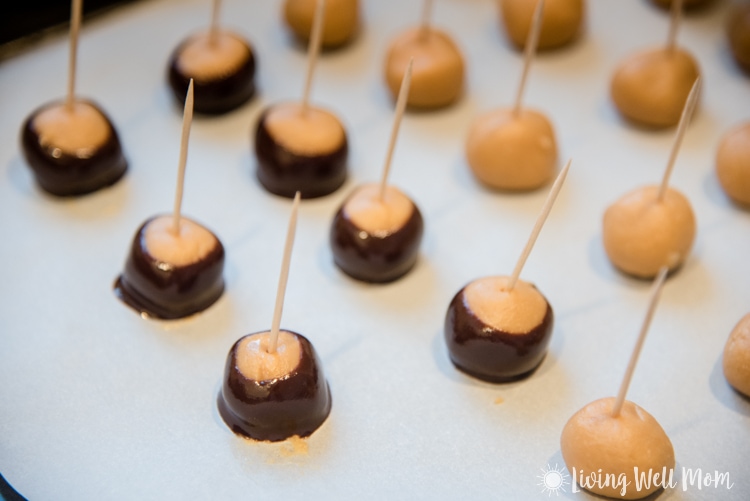 Place in the refrigerator and chill for about an hour.

How to Store the Paleo Buckeyes

One note: be aware that the homemade coconut-oil based chocolate coating is more prone to melting or softening than regular chocolate. You may want to keep your Paleo Buckeyes in the refrigerator. Ours were just fine in a sealed container in the cupboard though. 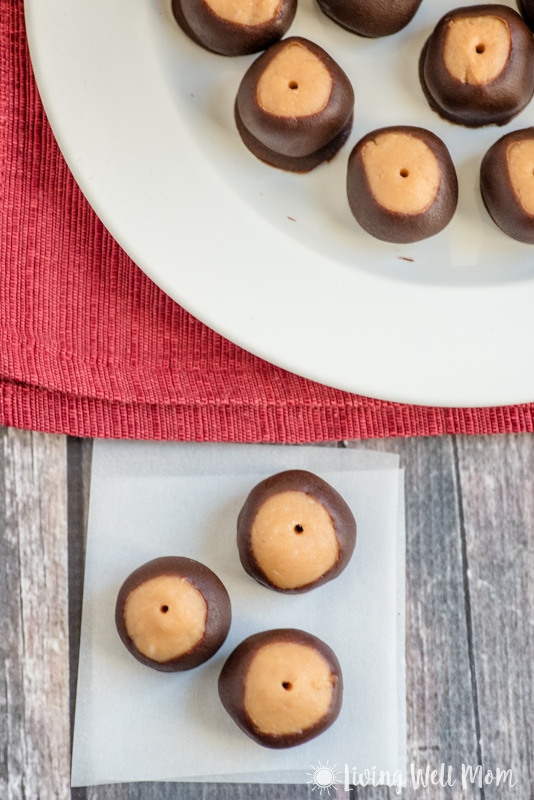 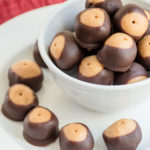 A healthy version of our favorite chocolate-and-peanut-butter-balls and so delicious, they’ll disappear just as quickly as the original!

**One note: be aware that the homemade coconut-oil based chocolate coating is more prone to melting or softening than regular chocolate. You may want to keep your Paleo Buckeyes in the refrigerator. Ours were just fine in a sealed container in the cupboard though.

Copyright © Living Well Mom. All content and images are copyright protected. Please do not use my images without prior permission. If you would like to republish this recipe, please re-write the recipe in your own words. Alternatively, you may link back to this post for the recipe.

Just pin it below to find the Paleo Buckeyes recipe later!