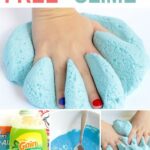 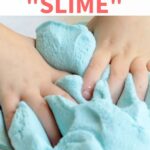 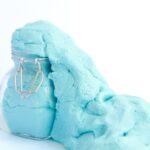 This fluffy slime will keep your kids entertained for hours.

Slime is not only a great way to get in some tactile play, but it also can help introduce kids to basic science concepts too. 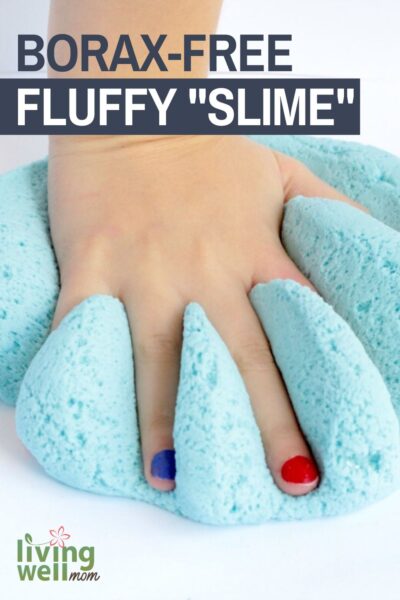 There are so many ways to make fluffy slime, but a lot of slime recipes contain boron. This includes laundry starch slime, Borax slime, and slime made with contact solution. This is a mineral that may be irritating if a person is exposed to it on a regular basis.

An issue that many families seem to have with fluffy slime is that the combination of the laundry starch or Borax and the shaving cream can make little hands itchy and red. This combination of ingredients can cause more irritation than regular slime. However, this version, using baking soda and dish soap, leaves hands feeling soft and is non-irritating to all but the most sensitive skin.

That was the initial reason I decided to make slime without borax. However, I have to admit it’s nice to have a fluffy slime recipe that doesn’t take a dozen ingredients! This version only has four, and that includes the coloring.

Slime Without Borax vs Slime with Borax 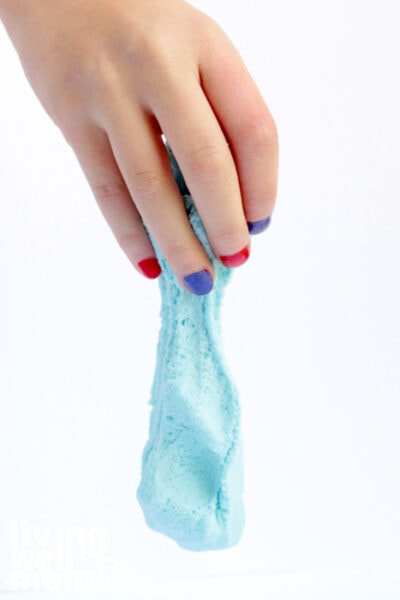 However, my children love this “slime” and find it stretchier than playdough or other non-borax recipes.

Just keep in mind as you try this slime that it will be different than ‘true slime’, given that the borax is where you get the truly stretchy results.

If you prefer a version WITH borax that is more stretchy, check out my easy homemade slime in 5 minutes (aka) gak that does contain borax.

How to Make Fluffy “Slime”

Ready to start making the fluffy slime? Your kids will be playing with it in minutes! 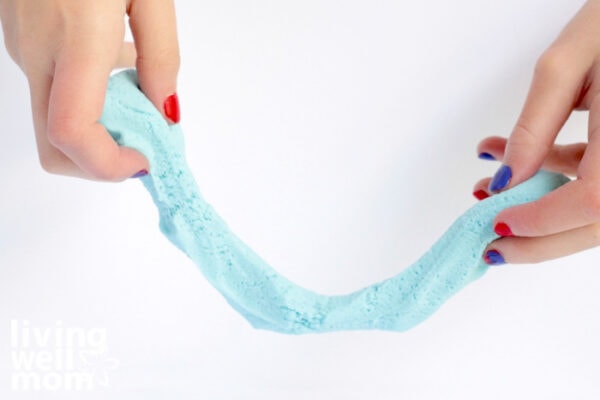 There are just four simple ingredients you’ll need to make this slime. You may even have them all at home already. You’ll need: 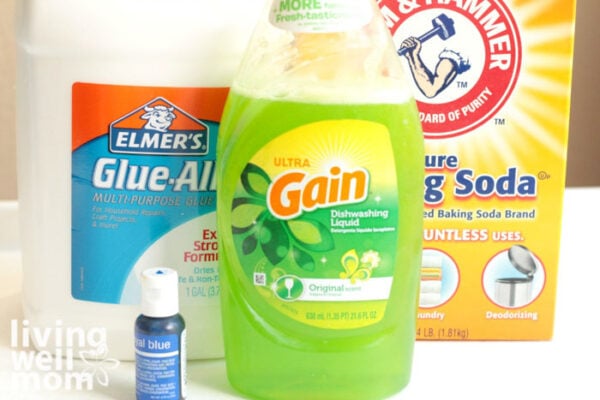 Steps for Making the Fluffy Slime

Mix 1/2 a cup of Elmer’s glue with about a tablespoon of dish soap. Add 2-3 tablespoons of water and stir. The mixture will start to foam, at which point you can add in your favorite color of food coloring. 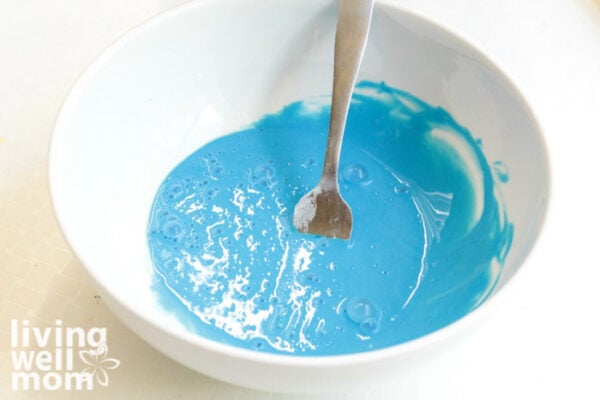 Add one cup of baking soda to the mixture and stir. Here’s where the science experiment comes in: the baking soda and glue will start to react, creating a stretchy slime that is slightly heavier in texture than regular slime.

Add more baking soda until you can handle the slime without it sticking to your fingers. How much you need will depend on the humidity levels – in the summer, readers have reported needing a whole box of baking soda, while we have made this recipe several times in the winter with just 1 cup. 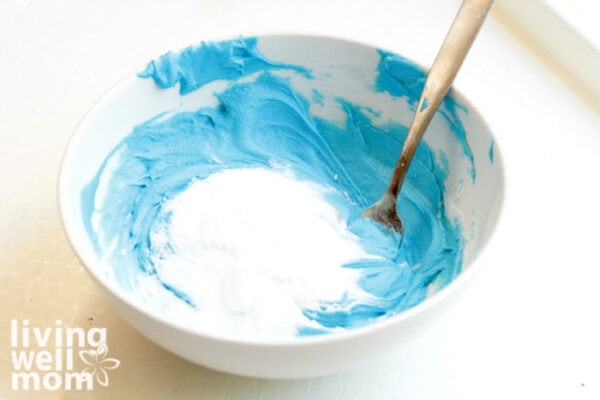 The slime won’t be quite as stretchy as borax-based slimes, but it will stretch and pull to some extent. If you add too much baking soda, however, you will transform the slime into a play dough, which although fun to play with, doesn’t quite have the same effect.

If you do end up putting too much baking soda in, you can add a little more dish soap to thin it out again.

Kids will love this fluffy version of slime. My kids loved puffing it up into a ball, then pressing their hands into it. They also had a blast stretching and pulling the slime like they do with traditional borax-based slime. 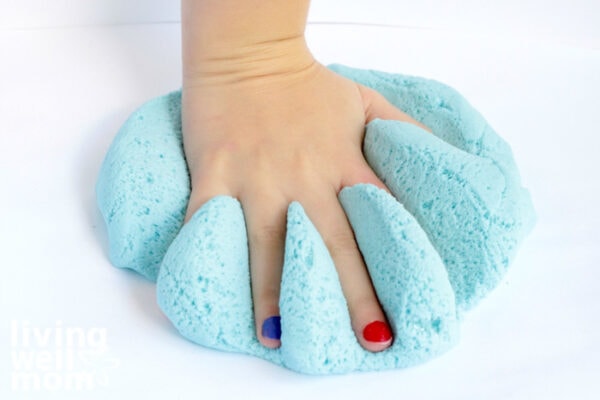 I really liked this version of fluffy borax-free slime, because once the kids were done with it, their hands were so smooth and smelled amazing!

Since I first made this fluffy slime post, I have had a lot of reader questions and comments. I collected some of the most common ones to address here.

While I will often give substitutes to try in my projects, this is one where I can’t. I highly recommend you use the recommended ingredients as listed above. We have found this recipe to be unforgiving for ingredient substitutions.

How to Store Homemade Slime

Store your fluffy slime in an airtight container or plastic bag. It should last for 3-4 days. Because it’s not preserved with borax, it is likely to get sticky and runny after a few days. 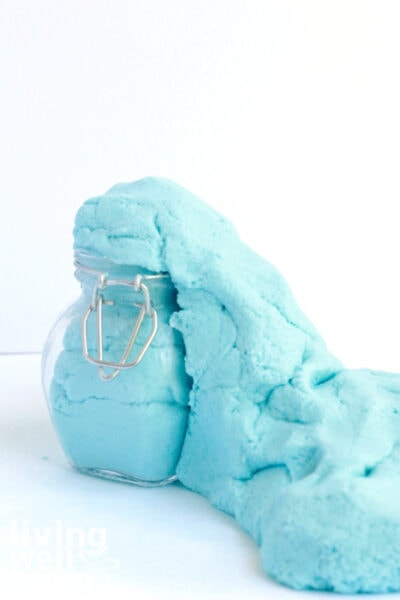 This slime won’t have the same texture as traditional slime. In most slime recipes, the borax helps the ingredients bond, giving it a stretchy texture.

This version is more like a stretchy, soft play dough, which will have some of the same sensory benefits as traditional slime but won’t act like “true” slime due to the absence of borax. It is a wonderful alternative for kids with sensitive skin to provide sensory input without skin irritation.

Make sure when you mix the glue dish soap that it creates a foamy, airy texture. This is what will make the slime work. Some brands of soap work better than others. We used Gain dish soap and it worked great.

When we first published this recipe, it appears we weren’t as clear as we should have been on the baking soda quantities. To all those commenters who tried this recipe and were bummed they needed more baking soda, even a full box, sorry about that! We’ve updated the post to make it extra clear that you may need MORE than 1 cup of baking soda when making this “fluffy slime.”

If you do this activity during the summer, especially when it’s humid and damp, you WILL need more baking soda. You might need even a full box of baking soda or 2-3 cups worth. If you make this during a dryer time of year, you will need less, probably closer to 1 cup of baking soda.

I suggest having a full box of baking soda just in case you do need more. (At least baking soda is super inexpensive!)

Help! My Slime is Too Thin

If your slime is too runny: Add more baking soda until it thickens. Depending on the humidity in your room and how liquid your dish soap is, you may need to add 2-3 cups of baking soda, possibly a whole box.

What to Do if the Slime is Too Solid

If your slime is too solid: Add a bit more dish soap until it has a pliable texture.

I hope your family enjoys this fluffy “slime” recipe as much as mine does! 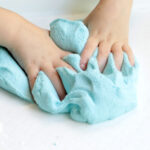 *Pin the image to save this homemade dish soap “slime” for later. 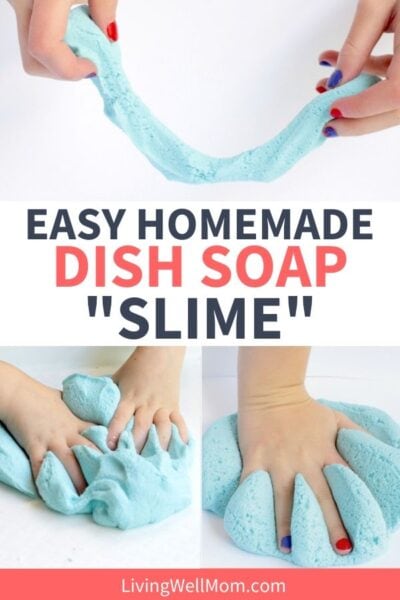