Five nights ago, I was running as fast as I could from my kitchen. I think I may have been screaming. No, I wasn’t angry or running from something gross my boys did.

I was running from an animal. A fluffy cute animal who decided to grace our kitchen with its presence.

Let me back up; I love animals. I have a dog, a cat (with a new kitten joining us in 2 weeks), 2 bunnies, 50+ chickens, and most recently 2 goats. I’m the person who carefully captures a spider and carries it outside.

But four nights ago, I screamed and ran from this visitor. Because this wasn’t an ordinary visitor and no, it wasn’t a mouse. (I’ve been known to cry when my husband catches a mouse in a trap.)

This visitor was a skunk.

You know those fluffy black and white creatures that have a tendency to spray and stink very badly for miles around if they’re threatened?

And he (or she) was in my kitchen.

It all started that evening when we put the chickens away. It’s generally a family affair – we all go outside and visit our girls (and boys) in the two coops, count each one, say good-night, and shut them in. Last Thursday night was no different. We all put the chickens “away.”

The kids came inside last. Nate and I went into our bedroom to catch up on the happenings of that day and talk about our weekend plans. Little did we know what was in store for us!

We sent the three younger kids – Emily, Joshua, and Luke – up to bed and promised to tuck them in a few minutes later. Our oldest Nathan had earned some Minecraft time on the computer so he was enjoying that privilege.

Our master bedroom is downstairs and just a few yards away from the kitchen. I remember walking out of our bedroom and toward the kitchen to get a glass of water. Or maybe it was tea. Either way, I quickly forgot what I came for.

Bailey, our Cocker Spaniel, was acting strange. He was barking and rushed down the stairs to the family room, then back up just as quickly as I walked by. I thought he was chasing Josie, our cat, at first, but it quickly became clear he wasn’t.

I walked around the corner into the kitchen and simultaneously saw the open screen door to my left (courtesy of one of the kids) and 10 feet away under the kitchen table where Bailey had just ran, a flash of black and white fur.

My country girl kicked in and in that split second, I knew what it was. I turned and ran toward my bedroom door as fast as I could. I think I was yelling “SKUNK!” I slammed the door behind me because I knew our skunk visitor was spraying Bailey and I wanted to keep the stink out of the room.

Nate jumped up, we grabbed Nathan, and yelled for the other kids to stay upstairs.

Bailey had disappeared. He had run outside to bury his head in the dirt; he had been hit full blast in the face by skunk spray. Poor dog!

We crept around the kitchen and discovered that the skunk had hidden in the pantry.
No, not a big walk-in pantry but a simple shelf pantry. See it here in my pantry organization post.

The skunk took my potato bin hostage and bristled and glowered every time he saw us. 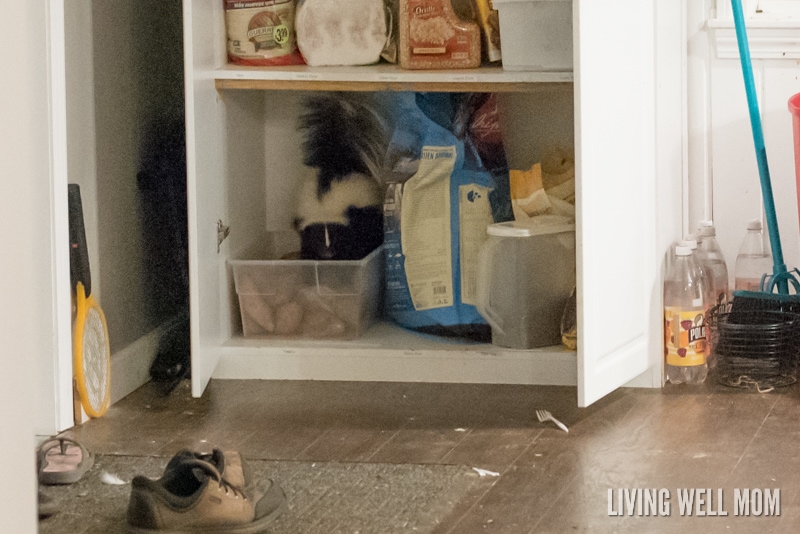 We spent over two hours trying to figure out how to get our stinky visitor out of the house.

Here in rural New Hampshire, we don’t have animal control. Our only option is New Hampshire Fish & Game, which is only open during the day. Nate called our local police department to see if they had any resources or advice and they said we could lock the skunk in the pantry and let Fish & Game take care of it in the morning.

But who wants a skunk in their house all night?! Not us!

We were on our own.

I posted on a NH Facebook group and got all kinds of advice, both good and bad. One guy suggested that my husband just “glove up” and go for the skunk with a beach blanket and just let it spray him. Um, thanks, but no thanks. I kinda want to avoid it spraying in my house for a second time, you know?

Finally, we decided to barricade the area from the pantry to the screen door, shut all the lights off, and see if the skunk would just leave on it’s own.

About 5-10 minutes later, the skunk ventured out carefully. One it was outside, the skunk hightailed it out of there.

The skunk was actually fairly small and we’re guessing it was probably a stupid juvenile skunk who didn’t know what he was doing. I bet he’s miles away by now and won’t come anywhere near here again. He’s probably telling his skunk brothers and sisters all about his “near death” experience with the “human house.”

Okay, so that’s my crazy animal side coming out.

A skunk had just sprayed IN. MY. KITCHEN. and all I could do was laugh that night. Sometimes life hands us things that are so bizarre, you just can’t help but laugh, you know?!

We tied poor up outside because there was no way I was letting him in my house.

Then we had to deal with my kitchen. The stench was getting worse and worse. By this point, it was almost midnight so we opened all the downstairs windows and turned on as many fans as we could. That lessened the skunk stink enough that we could go to sleep.

The next morning, we tried a hydrogen peroxide-baking soda-Dawn dish soap mixture on both the dog and my kitchen floor. It helped some, but we definitely needed more help.

We learned our homeowners insurance wouldn’t cover any damage. There’s a standard “no varmint damage” clause and it’s not even possible to add extra coverage for future incidents. They just don’t cover it. (Does yours?)

So we were on our own. Reading stories online scared me; how bad was it really going to be?

The skunk sprayed directly under our kitchen table and we quickly realized that our poor table (and the dog) had taken the brunt of the spray. Thanks for taking one for the team, I guess?

We carried the table, benches, and chairs outside and there it sits 5 days later because despite all our efforts, it still wreaks of skunk. 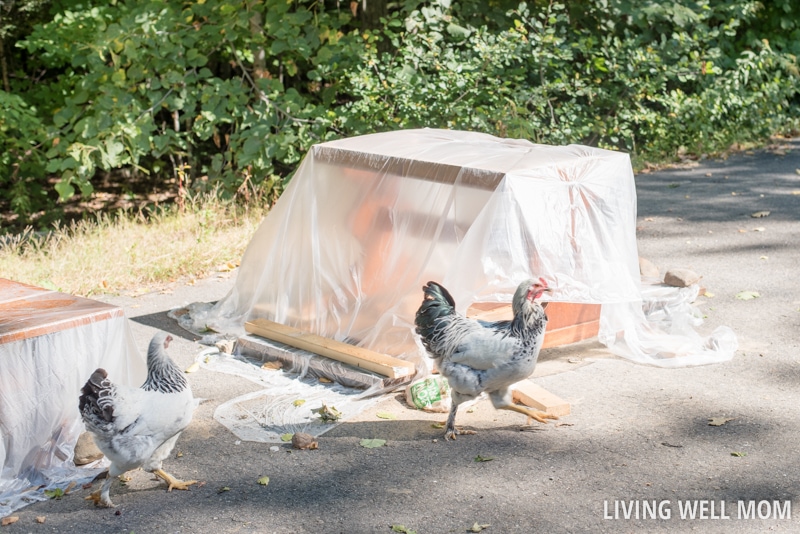 so we bought two big bottles. Thank goodness, it works. (And no, this is not a sponsored post!)

I sprayed the dog with it. We let it soak in, then gave him a bath. It took 90% of the odor with it. 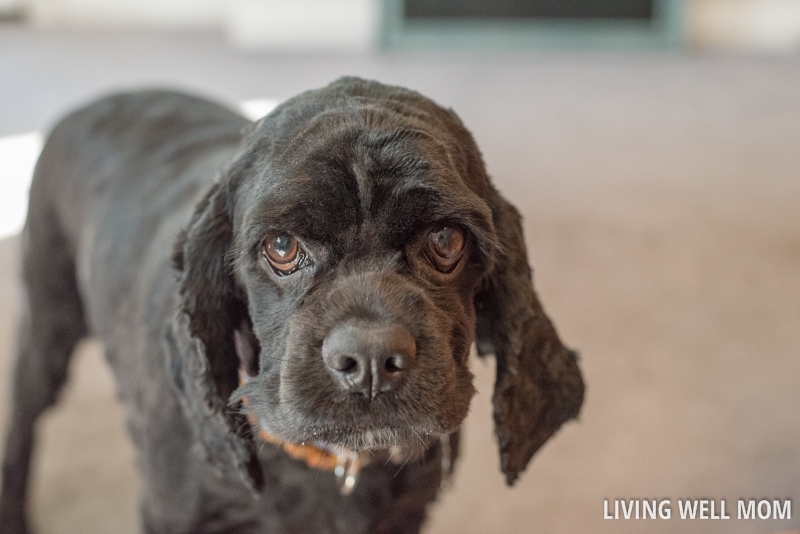 We sprayed the skunk odor remover all over the kitchen floor and wall. We sprayed the counters, cabinets, and appliances.
We spent almost all day Friday cleaning and scrubbing.

And the smell went away. At least mostly.

Five days later, I don’t smell any skunk odor, though I’m sure someone visiting might catch a whiff. I know our noses have probably adjusted to it.

I think we need to replace our kitchen table because the odor has literally soaked into the wood. But other than that, the damage was minimal.

And we have a story to tell that will probably pass down for generations. Because a skunk spraying in your kitchen is not something anyone forgets anytime soon.

Our “skunk story” was a good reminder to me of just how little control we have over life. Sure, if my kids had shut the screen door, this whole thing wouldn’t have happened. But they didn’t and it did.

(Needless to say, my kids got a good talking-to for leaving the door open and they did help clean.)

We can try to hold tight to life and make everything perfect, but sometimes we just have to let go and realize that skunks will come.

Life isn’t perfect; it never will be. We can fight it and beat ourselves up when things don’t go as planned or we can choose to roll with it and laugh it off. Sometimes you do have to cry (I almost did Friday morning when we were cleaning) and that’s okay. 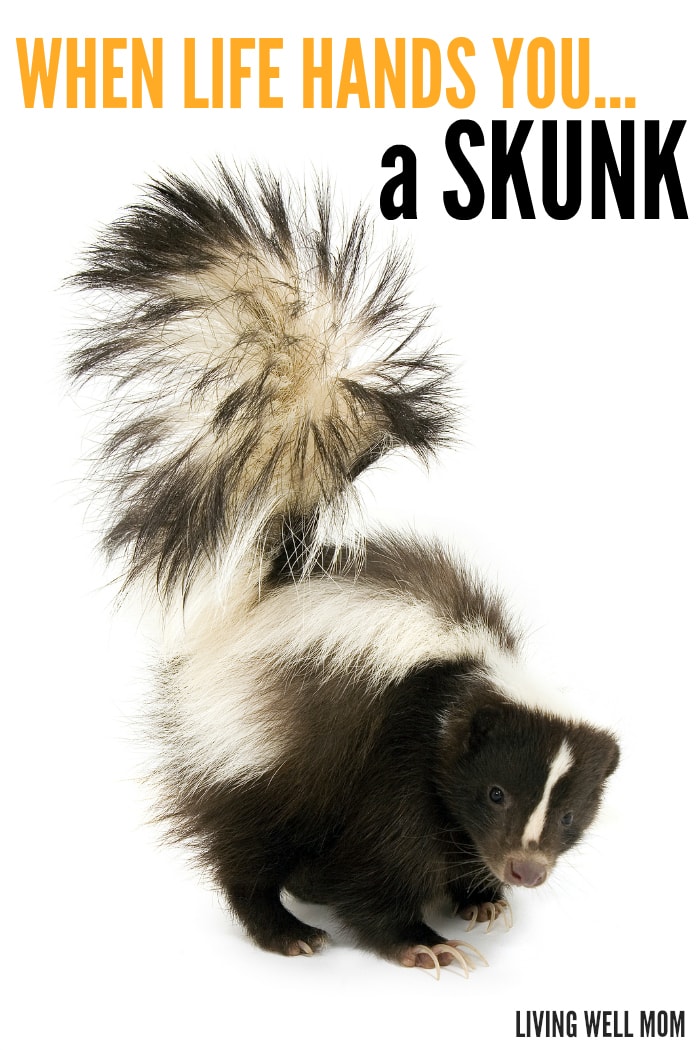 Just remember, we all have our “skunks.” 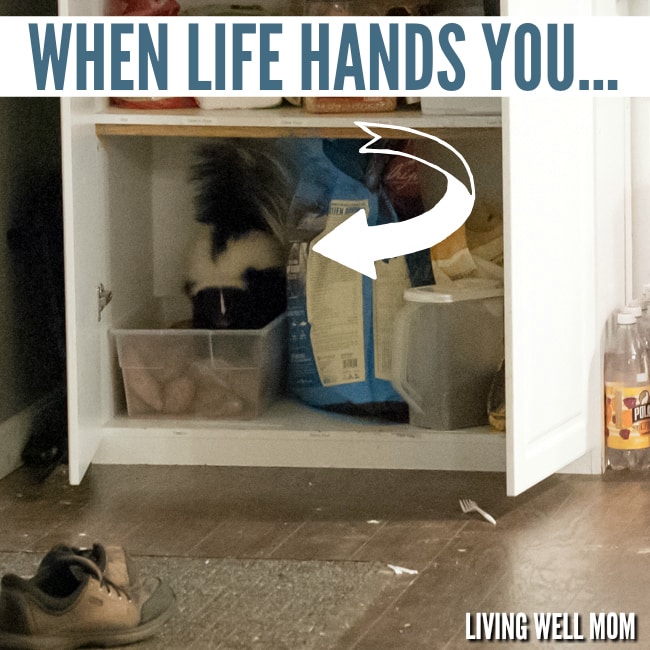