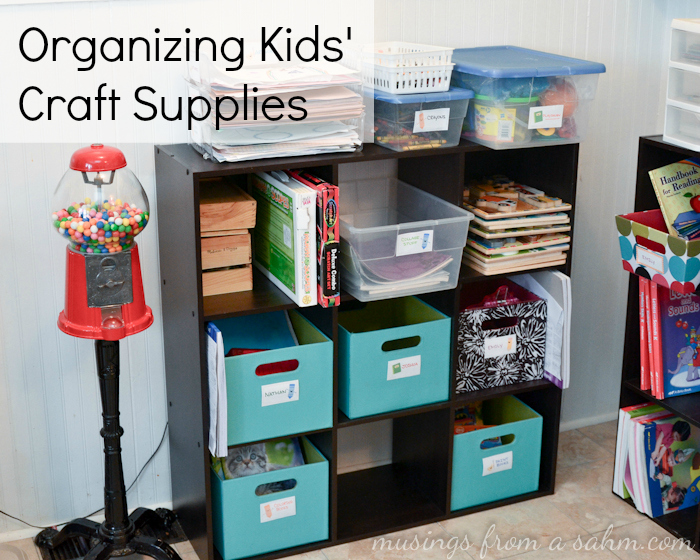 I’ve been organizing like a crazy woman lately. I’ve gone through organizing sprees in the past, but it usually doesn’t work for long. This time, my goal is to get my house organized in a way that actually works for my children.

The thing is, with a 2, 3, 6, and 9 year old, I absolutely expect to have to straighten things myself, but I want my kids to be able to put things away on their own. And that means a realistic system that’s simple for them to follow. Because if it’s not simple, the system won’t work.

One of my recent goals was to tackle organizing the crazy amount of kids crafts supplies, coloring books, crayons/markers/pencils, notebooks, special art kits, puzzles, playdough, paintbooks, etc. we have. It can be a whole lotta stuff. You moms know what I mean.

Previously, my attempts at organizing that stuff didn’t work. It wasn’t realistic. Maybe I was willing to open a drawer and sort through a stack of coloring books to find the one a child wanted, but that child was not.

Since I had to organize our homeschool area at the beginning of the month, organizing the kids craft section was a natural extension of our homeschool stuff.

I opted to use a 9 cube organizer

for our homeschool materials and picked up a second unit for organizing kids crafts supplies.

Unfortunately, I don’t have a “before” picture because stuff was all over the place before. There were coloring books in a bin on the top shelf of the downstairs closet. More coloring books and notebooks and scrap paper in plastic drawers in the barn (which is unheated and cold in the winter.) Shamefully unused Melissa & Doug puzzles stored in crates in the barn. Crayons and markers in random bins all over. And a box full of artwork that I had yet to go through sitting in the barn too. Really.Not.Good.

I was ready to get started.

Kids can have a surprising amount of paper. There’s paper to-be-used for projects (scrap paper and construction paper and notebook paper and miscellaneous things like stuff for collages) and then finished papers too.

I needed something that offered the kids easy access to all that  for drawing and craft projects and a spot to put their finished art projects. I found our answer in the letter trays I bought for homeschooling. 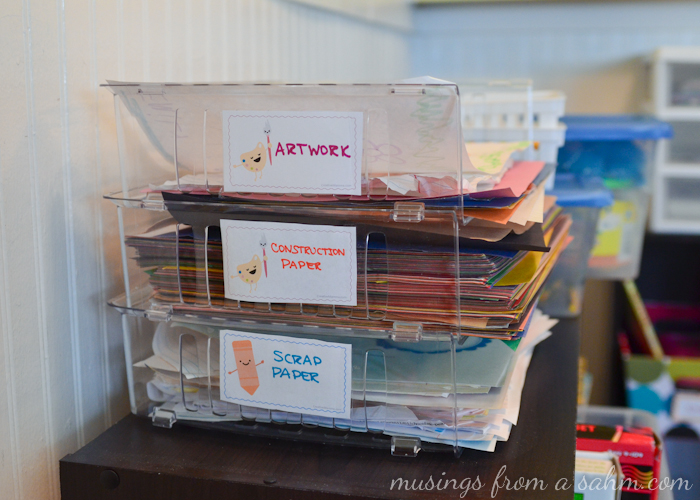 This is the perfect solution for us. Aside from the one time, my husband could not find the artwork bin, even when I pointed out, “It’s labeled!” But that’s another topic…

And every 1-2 weeks, I go through the artwork bin and pull out our favorites and we get rid of the rest. Emily’s drawing below is definitely a favorite… 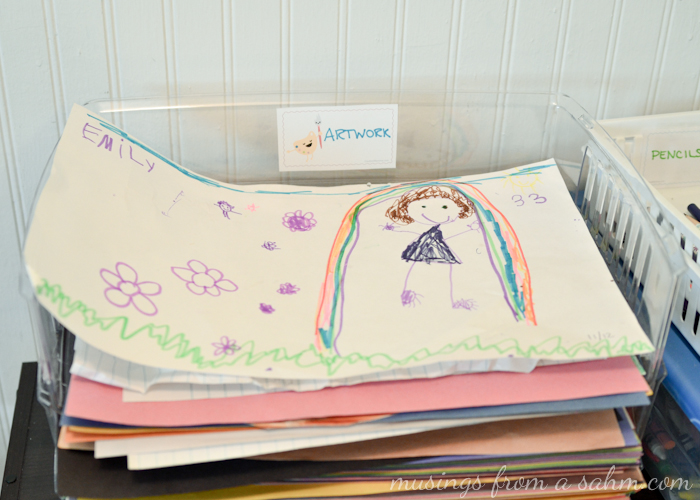 I kept organizing the crayons, markers, and pencils pretty simple. We have lots of crayons and they reside in a shoebox-size bin I bought for 99 cents at Walmart. Markers go in a white tray bin on top and colored pencils (and a few regular) sit on another white tray. 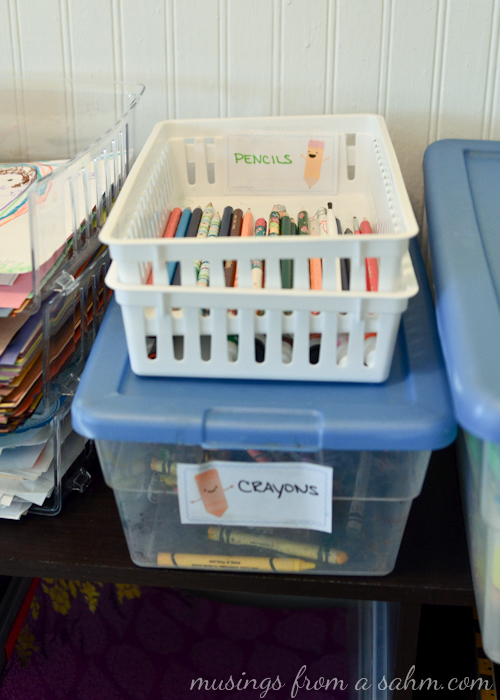 Our homemade playdough and accessories are in a larger bin on the top shelf where Luke can’t reach it. 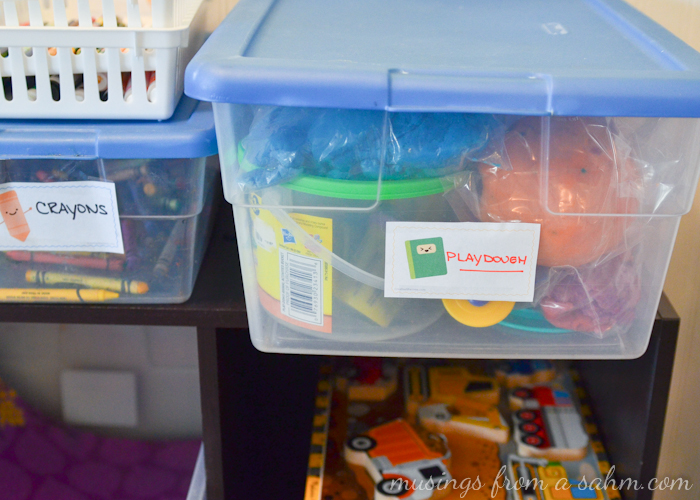 That sounds a lot fancier than it actually is. It’s really just a bin where I put things for the kids to cut and glue. For example, my old Pug dog calendar and a Precious Moments figurine catalog I know Emily will love to cut apart and glue into a notebook or something.

It basically holds those miscellaneous little things I previously never had a place for. 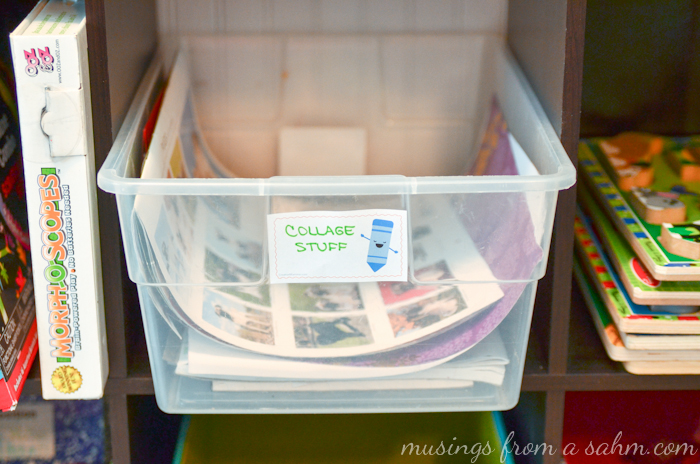 Puzzles are pretty simple. There’s easy puzzles for the little boys in one section. All Melissa & Doug puzzles

– huge favorites of ours and a must for easy-access. 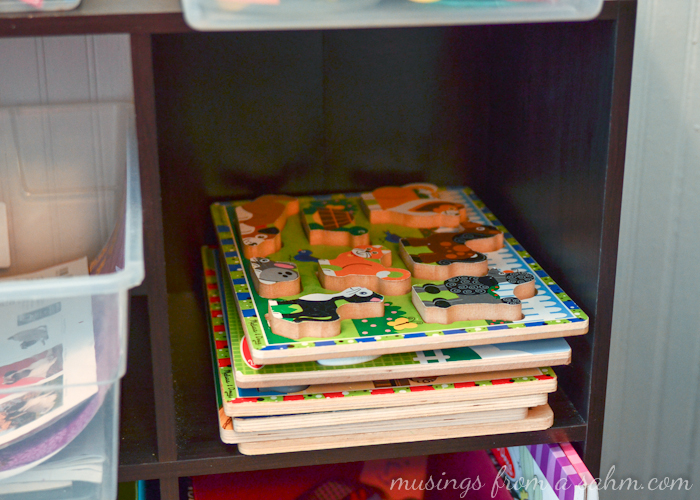 There’s another section for more-advanced puzzle sets…and a couple art sets for Nathan and Emily, including Nathan’s Morph-o-Scopes kit I reviewed last summer (he still loves it!) 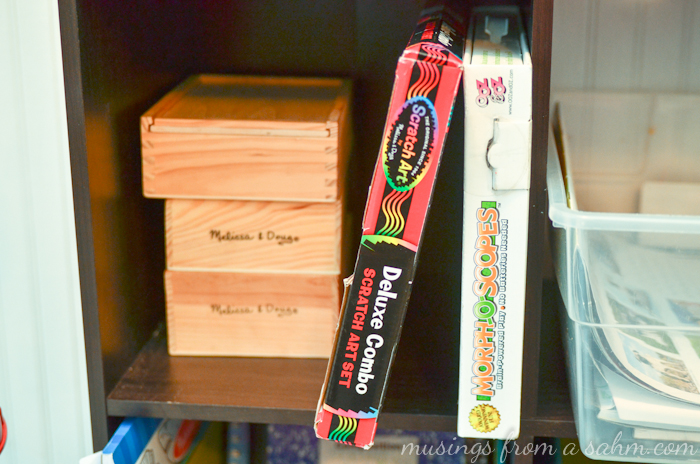 Individual Bins for Each Child

Each of my children have their own special interests which I encourage. That means each one needs their own place to put special treasures and kits.

That’s where these sturdy fabric bins I bought on clearance at Lowes came in handy.

Nathan’s bin contains mostly notebooks that he uses to draw in and write notes about various scientific things he’s interested in. He also has a miscellaneous craft kit he received for Christmas, and his pencil box from public school that is very special to him. 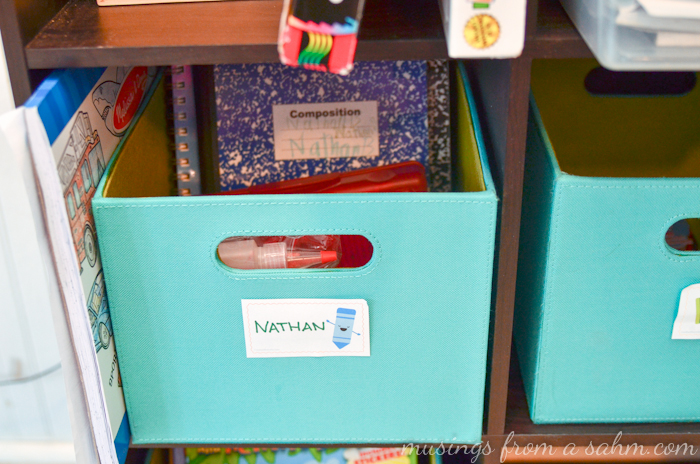 Joshua doesn’t have a lot in his bin yet – so far, just a domino set, but he loves it. 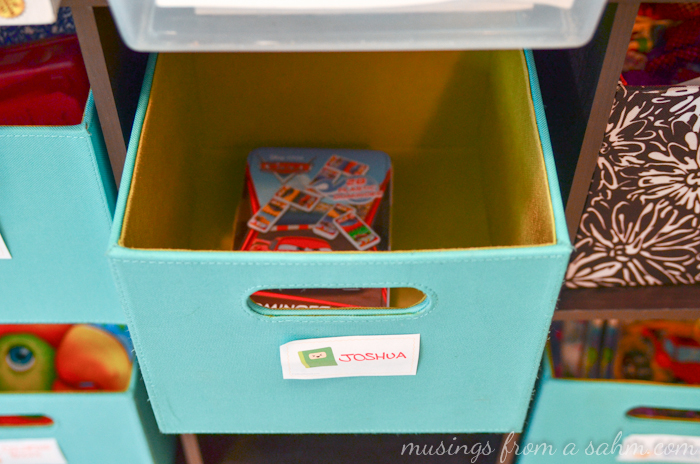 Emily has quite a few things in her bin, from sticker books to a special craft project and special Hello Kitty markers. 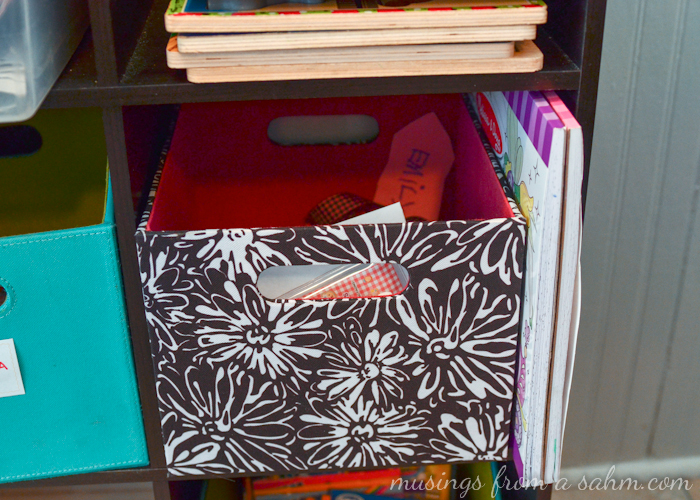 Luke doesn’t have a bin yet, but there is room on the bottom shelf.

So far, the kids’ bins is one of my favorite parts of our craft storage area. It’s been working fabulously.

We’ve always had a lot of coloring books. And the kids love to use them so I want to keep them available.

Previously, I’d tried to separate each child’s coloring books – Emily had her princess and Hello Kitty, while Joshua liked Blue’s Clues and Curious George, etc. But then Luke wanted Blue’s Clues too and Nathan didn’t care about Transformers anymore and it just was too confusing.

So I designated one bin to be the coloring book bin. All the books are in there. Most of them are fair game for everyone to share nicely. There are a couple that are an individual child’s – for example, Hello Kitty is Emily’s. And the Thomas the Tank Engine book Joshua got for his birthday is his. But the kids’ know that now that it’s all organized in one place and it’s worked quite well. 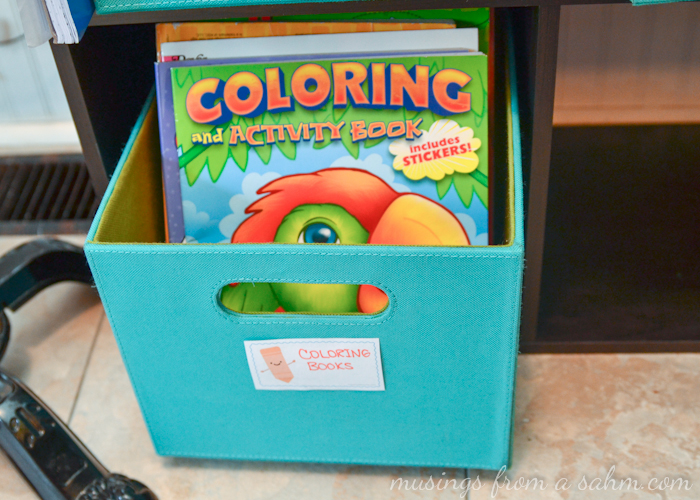 Paint books is another thing. We still have quite a few paint books from the Savvi’s Magic Paint poster review I did. Which is surprising because they were/are a huge hit with my brood. Why? I wasn’t storing them in a place where the kids could find them! So now they can with our Paint Books bin. 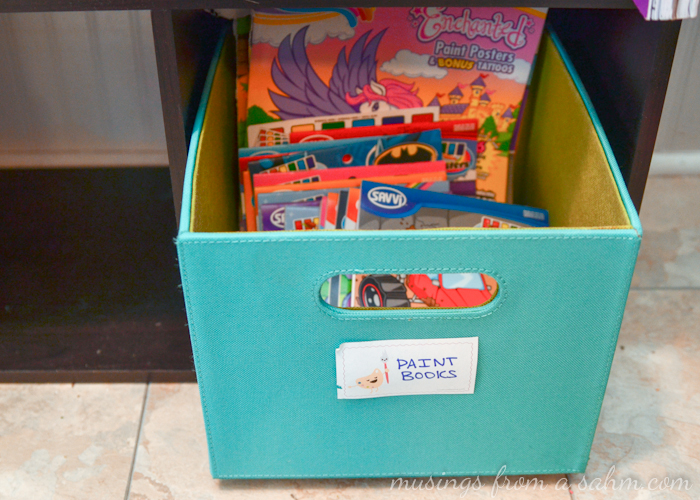 There is one middle cube still empty. That will be where Luke’s bin will eventually go. 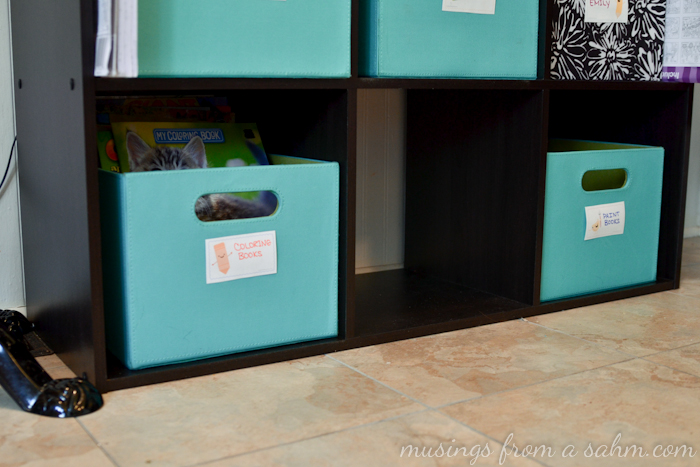 So that’s how I organized the kids craft supplies and stuff. We’ve had this for almost a month now and this system really does work.

It works because it’s so simple. The kids love it because they know where to find stuff. And where to put it when they’re done. Even three-year-old Joshua knows.

An added bonus for me? I’m not constantly fielding requests for more-expensive computer paper! The kids know right where to find their paper.

To me, that’s what organizing is all about.
And I love it. 🙂

Stay tuned as I’m organizing my bathroom and kitchen next…

Whichroom or area in your house do you plan (or need to) organize?