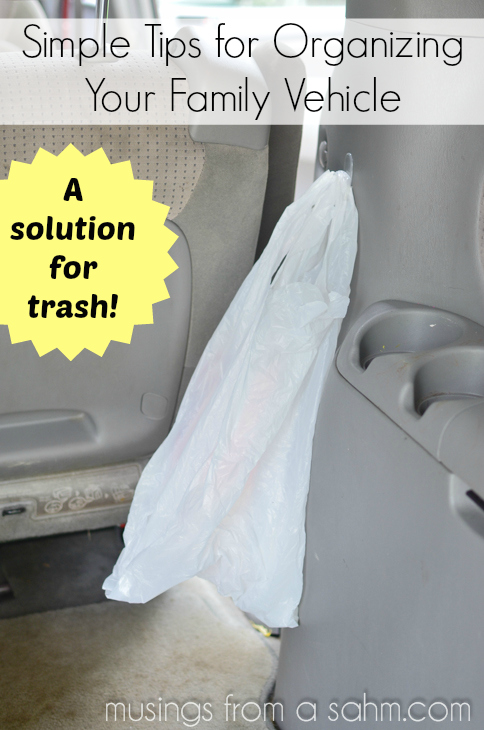 It’s easy to forget about car organization. We’re usually so busy coming and going that organizing our family vehicle is often only a passing thought. But an organized car can make life so much easier. Instead of forgetting things at home, you can plan ahead and make coming-and-going simpler and less-stressful for your family.

That’s why one of my goals this summer was to get our mini van organized. And I wanted to do it on a slim budget – basically, using things around the house.

But first I had to clean the van. And ugh, I didn’t relish the thought of dragging out the giant wet dry vac or dealing with all the filth the van has accumulated over the winter. But I finally tackled the project one beautiful afternoon a couple weeks ago. Of course the kids helped. And got in the way… 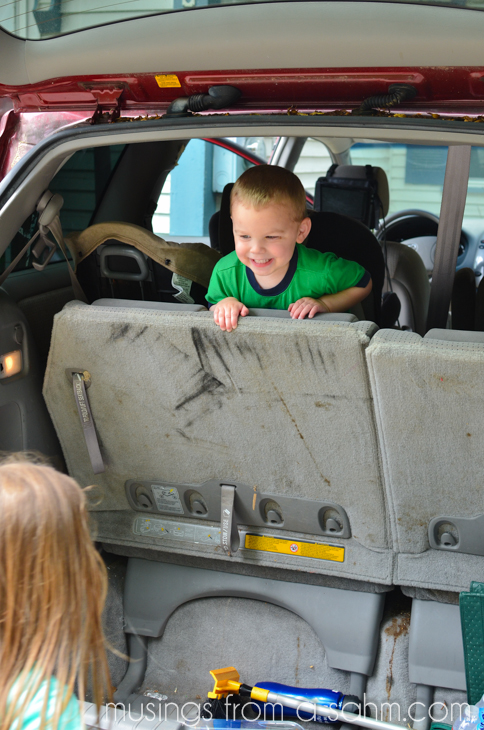 It took me a good two hours to fully vacuum and clean out the van. It was that dirty. Four kids and muddy boots in New Hampshire, where mud season can last almost as long as winter itself and that’s a whole lotta dirt. And it’s still not as clean as I’d like it. (We need to buy new floor mats and pay for professional inside detailing…) But that’s another day.

There were three specific areas I focused on for organizing our mini van:

A Solution for Trash In the Car:

Trash was the biggest issue in our van. It was littered all over. Granola bar wrappers. Ziploc bags (from sandwiches.) Napkins. Old water bottles. Lots of papers.

I’m sure we’re not the only ones. Finding a solution for trash is an important part of car organization. If you don’t have a place to put it, it’s going to make a mess.

Previously, we used a cardboard box as our makeshift trash can. It kinda worked. 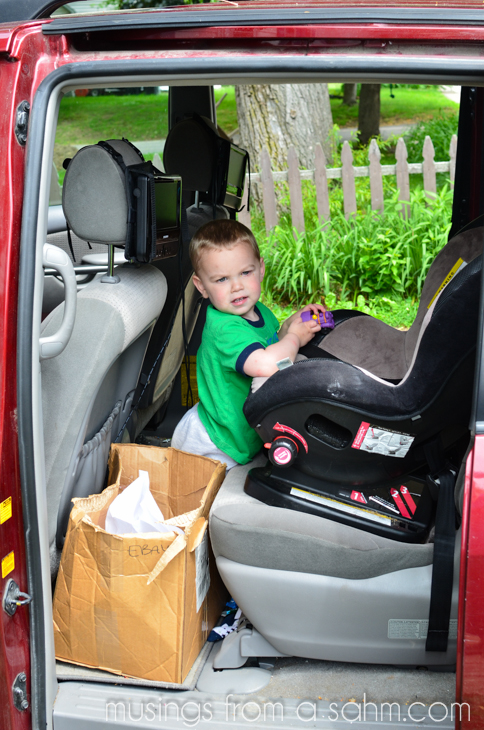 Except it took up valuable floor space. And since it was in the middle row, it didn’t help with trash in the backseat. Usually it all was left on the floor until I declared “time to clean the car” every few months and the kids grudgingly picked up. So it really didn’t work.

This was the number one issue I wanted to solve. And I found the perfect budget-friendly solution on Pinterest.

I put one small Command hook

on each row. The first went in the back seat row. 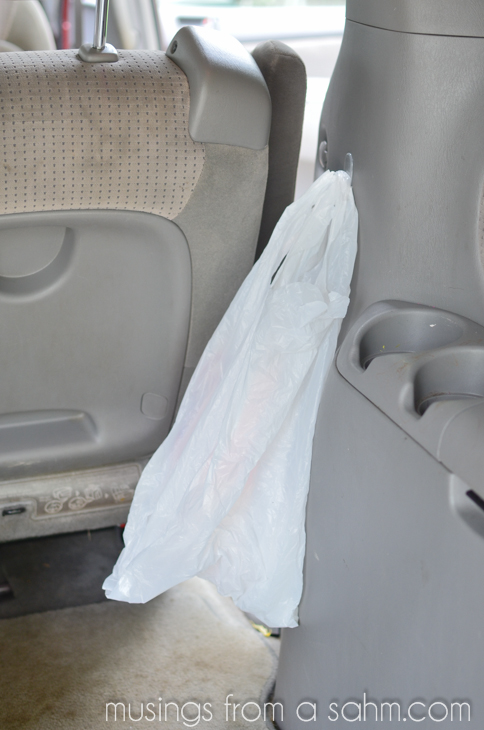 It’s off to the side so it won’t get in the way, yet it’s still accessible enough for the kids to easily toss stuff. I may add a second hook on the other side later, but for now, I think one will suffice.

(I only had to replace the tape once so far when Nathan thought it would be neat to see what happened when he pulled the bottom of the tape. Sigh.) 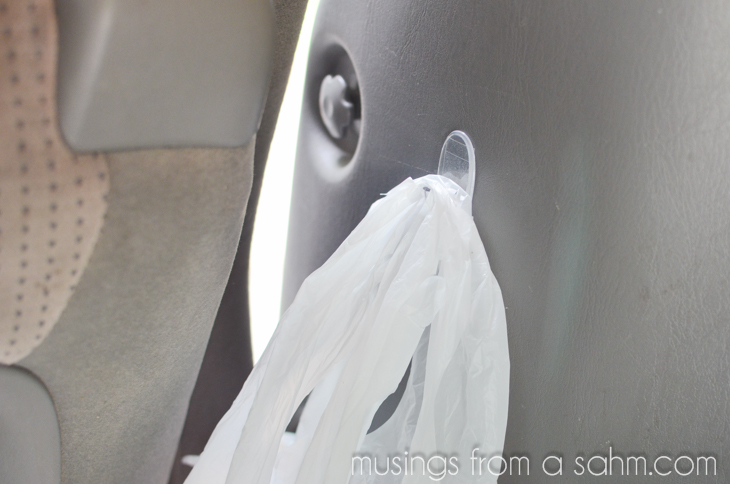 Next, I attached a second Command hook in the middle row of the van. 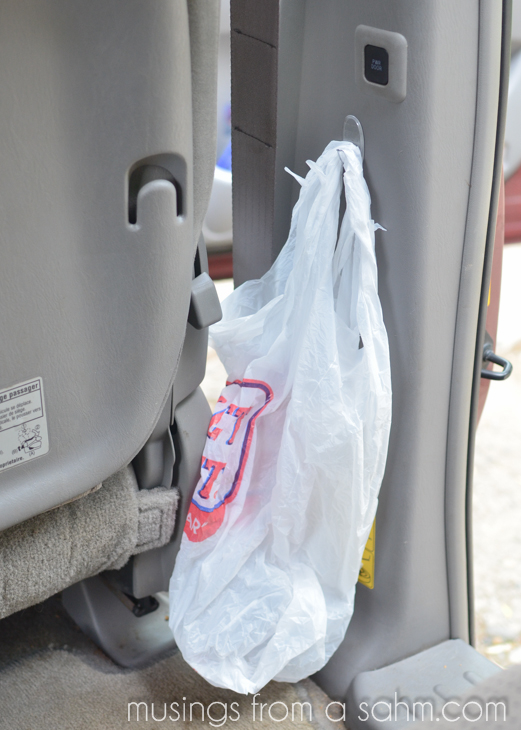 This is Joshua and Luke’s row. They’re still a little young to reach over and put trash in the bag while buckled in. But once we stop, they can each pick up their own sandwich bag and throw it away. 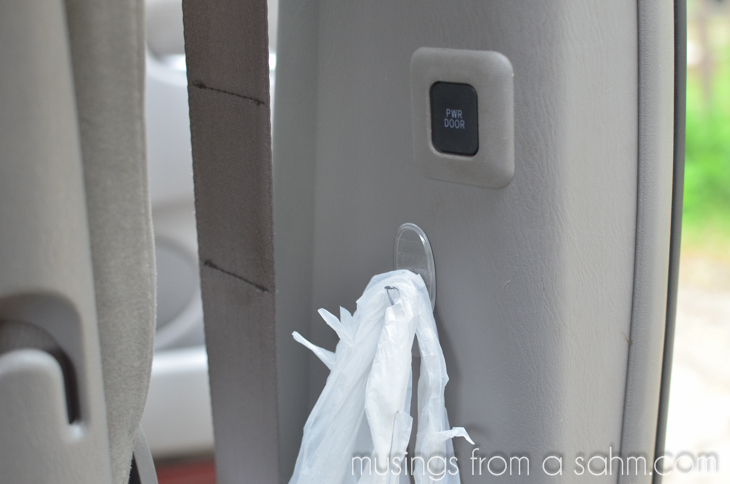 I was going to add a third hook in the front, when I realized our Toyota Sienna is already equipped with a small built-in hook. I’ve never used it before, but now it finally has a mission. It’s a little lower than I’d prefer, so I may still add a Command Hook above it later, but for now I’m giving it a trial run. 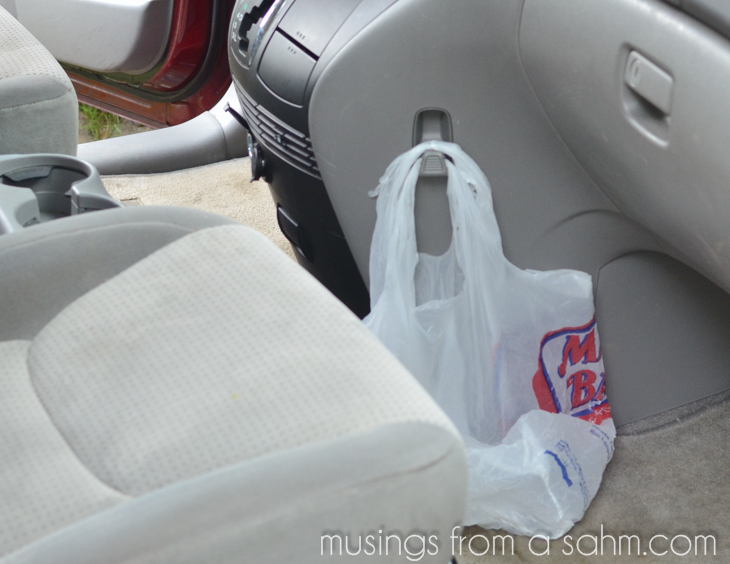 One small issue we ran into: empty plastic bags tend to fly around if the van windows are open while we’re driving. So, now we simply put the plastic bags in nearby cubbies if they’re empty.

Another advantage to this trash solution in the car is that it’s easy for the kids to help empty or replace the bags.

Organizing Snacks in the Van – Our Snack Bin:

I used to pack snacks for each time we went out. But it was one more thing to remember and I knew it would be simpler to just have the stuff in the car.

So I made a snack bin for the van. 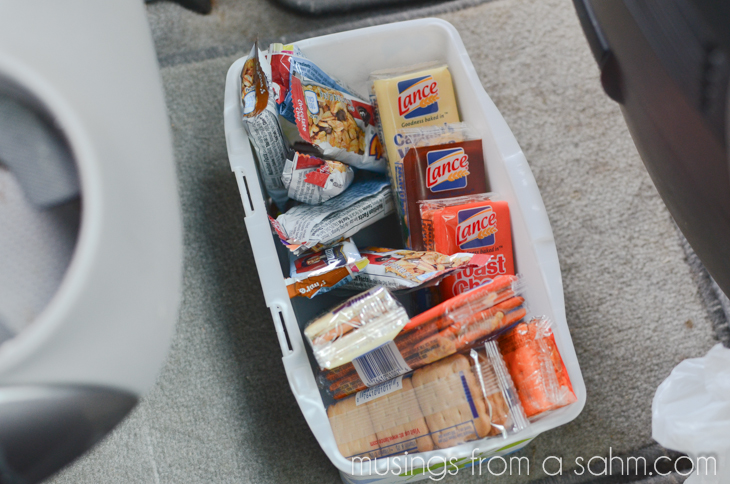 It’s small and fits under the middle console, which keeps it hidden from small children wanting to help themselves. 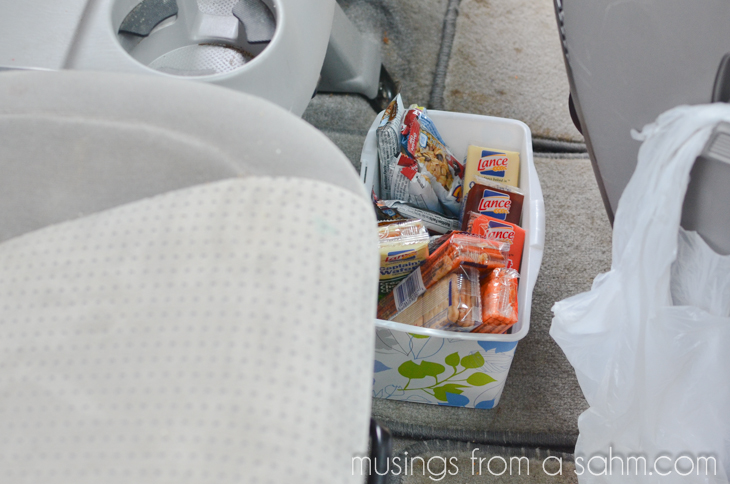 Now, I don’t have to remember to pack snacks (just occasionally restock it); they’re already in the car!

Unfortunately, Joshua gets carsick. Usually, it’s only on long car trips or in stop-and-go traffic, but it can’t always be predicted. I was reminded that I kept forgetting to stock the car with towels and a puke-bucket when we drove in horrible Boston traffic last month and Joshua got sick.

Our Car-Sick Bin holds a plastic bag, a small towel, baby wipes, and some Solo cups (which work great as portable “puke-buckets.” I know, I know – gross. But hey it’s a fact of life.) 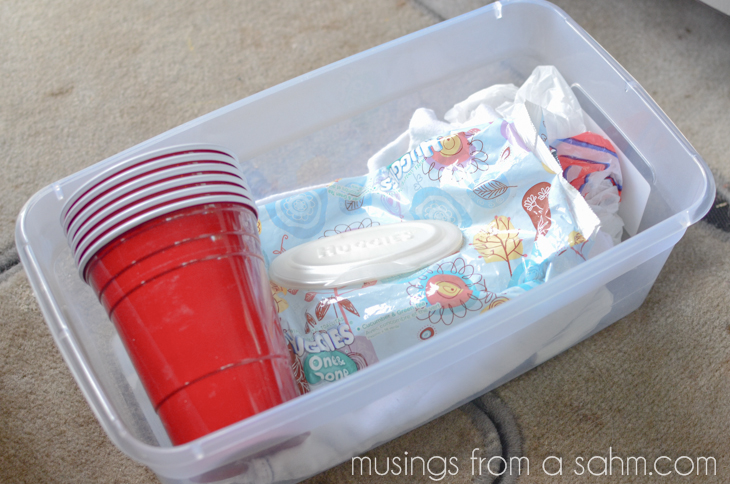 It all fits nicely in a small bin under the center console, where I can quickly grab supplies whenever we need it. 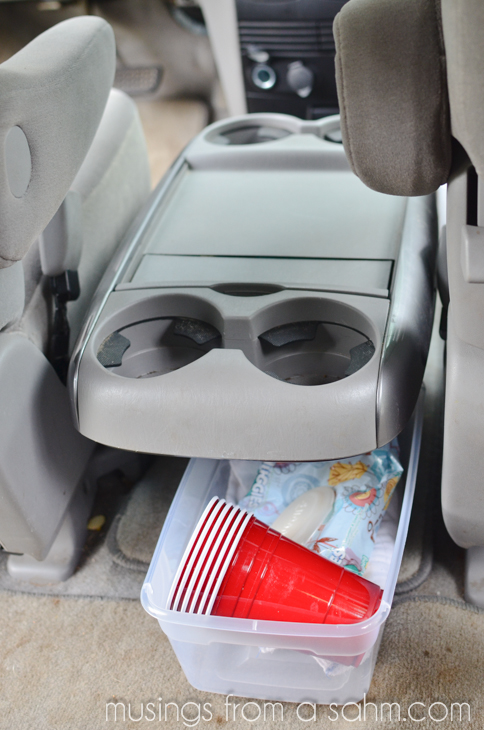 The next time we have an incident, this mom is prepared!

The Back of the Mini Van:

The back of the car is an area that easily gets out of hand with junk.

I cleared everything out and only put back the essentials. For our family, this includes:

Extra wipes, a few spare diapers for Luke (since I rarely use a diaper bag anymore), and a spare just-in-case-life-is-unpredictable-with-kids towel. 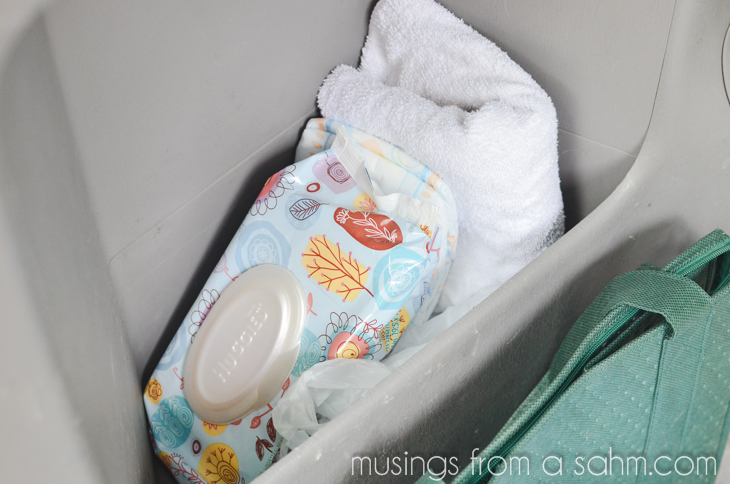 And a couple frozen-foods reusable bags and bottled water. We rarely buy bottled water, but I do keep some in the back of the van for the occasional day trip out. 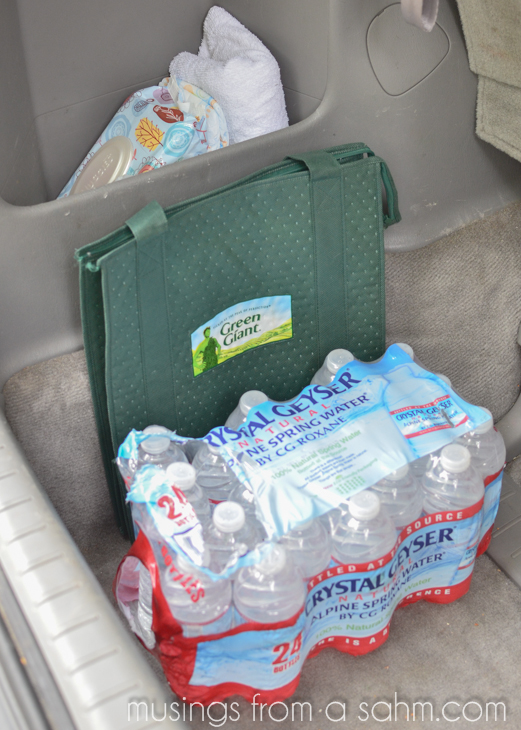 The rest of the back is empty, leaving plenty of room for whatever summer fun may bring us. Now I don’t have to move things around to fit in the beach chairs and blow-up floaties!

And that, my friends, is how I organized our mini van.

Do you have a favorite tip for keeping your family vehicle organized?