One of the first questions people will ask when it comes to chickens is: “Is that a hen or rooster?” Or as some people put it: “is that a chicken or a rooster?” Sometimes it’s easy to tell the difference as the roosters strut across the yard and crow. But other times, especially when chickens are young, it’s more difficult.

Today, I’ll show you how to sex a chicken, including the few ways you can tell hens and roosters apart. 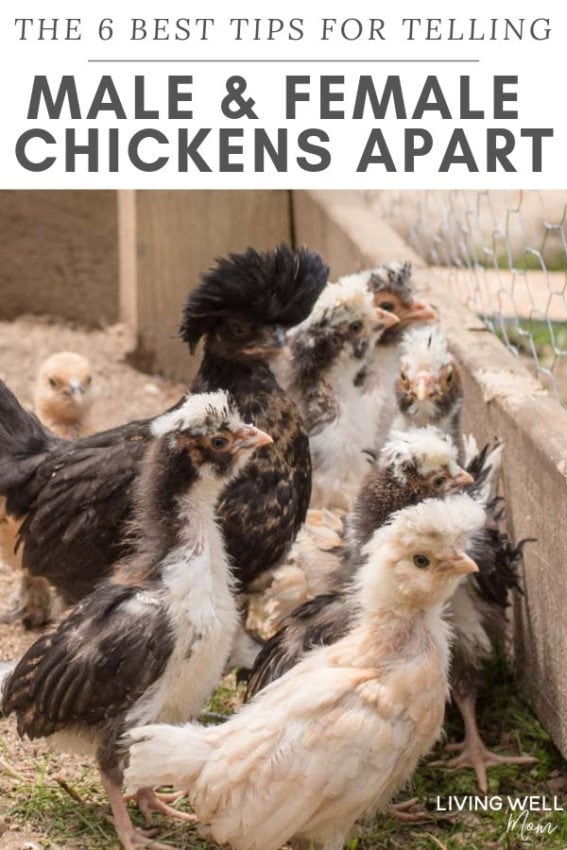 Hens and Roosters | Cockerels and Pullets

Roosters are chickens too, so that question won’t help much. Most people mean “hen” when they say “chicken.” Hen means a female. Rooster means male.

Now let’s go a little more detailed and look at the difference between hens and roosters, cockerels and pullets.

Jill is one of our pullets. She is a bantam (small) black cochin. 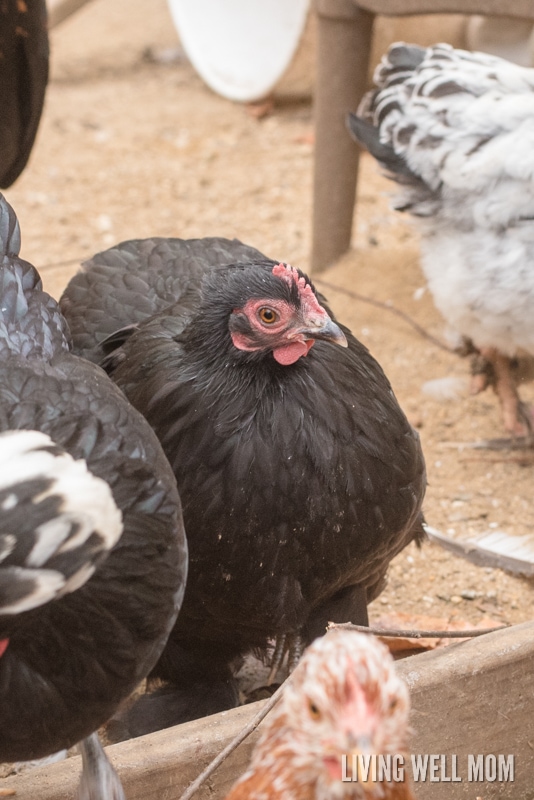 And here is Jack, her cockerel brother. He is also a bantam black cochin. 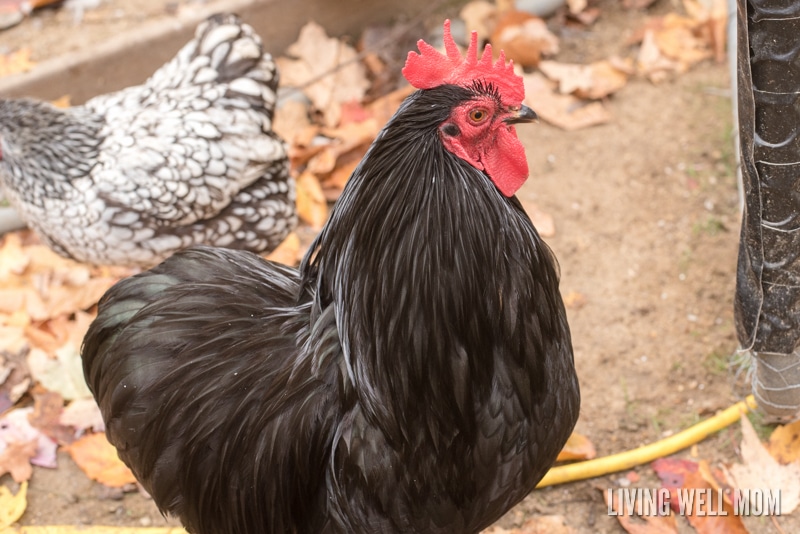 Now, the next time you hear someone talking about pullets, you know they mean young female chickens!

How to Sex a Chicken 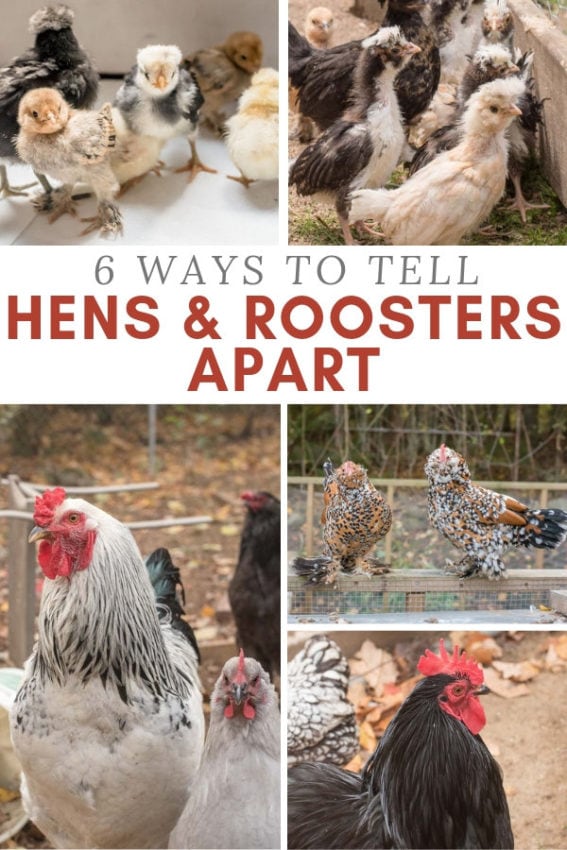 It’s difficult for the average person to determine the gender (otherwise known as sexing) of a young chick. In most cases, even experienced chicken owners will not be able to tell whether they have cockerels or pullets until the chicks are least 2-3 months of age, often longer for some breeds like Silkies.

These are two of our silkie hens with their young chicks. 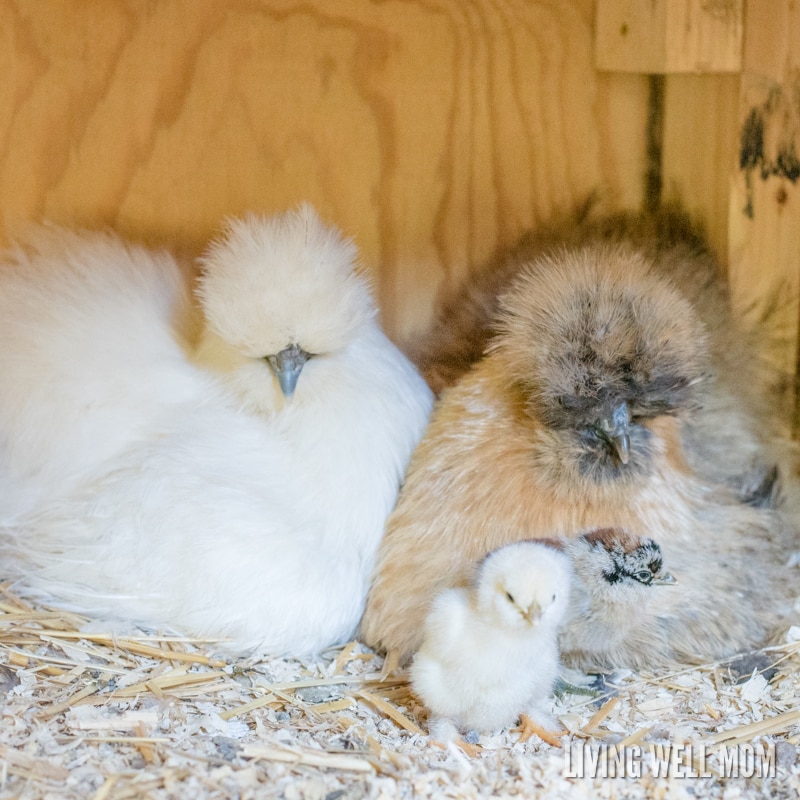 The most common form of sexing is called “vent sexing,” but if not done correctly, it could kill a chick. And even then, the odds are about as good as a coin toss when it comes to accuracy with this method unless it is someone very experienced. This is why the average backyard chicken keeper should not attempt this, I have not and will not, and neither should you.

In fact, typically the only places you can buy “vent sexed” chicks are from hatcheries where they have highly trained personnel to do it. Even then hatcheries are only accurate about 90% of the time. This means that if you order female chicks from a hatchery or your local feed store (they usually buy from hatcheries too), you still have a chance of ending up with one cockerel (or more.) 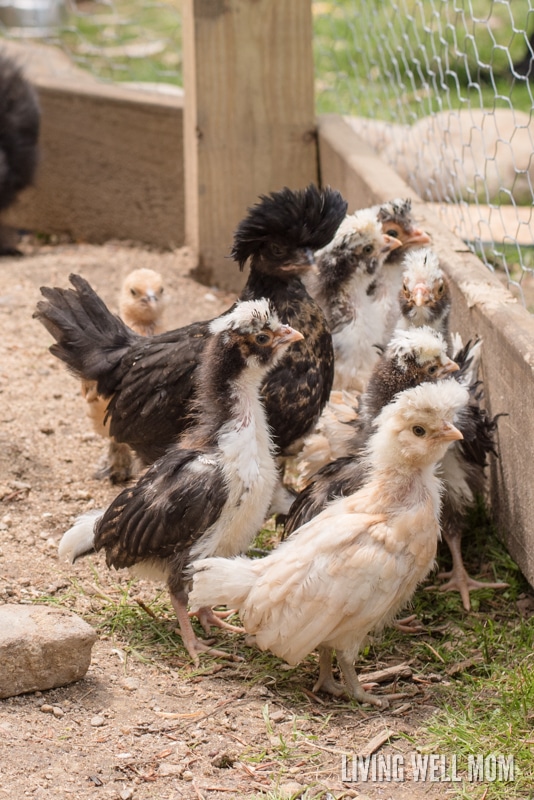 Here is a great article that talks about sexing baby chicks.

If you buy chicks from a local chicken breeder, they will likely sell you “straight run” chicks.

Straight run means the gender is unknown and chicks are not sexed (again because it’s nearly impossible) and your odds of having boys or girls are usually 50/50. 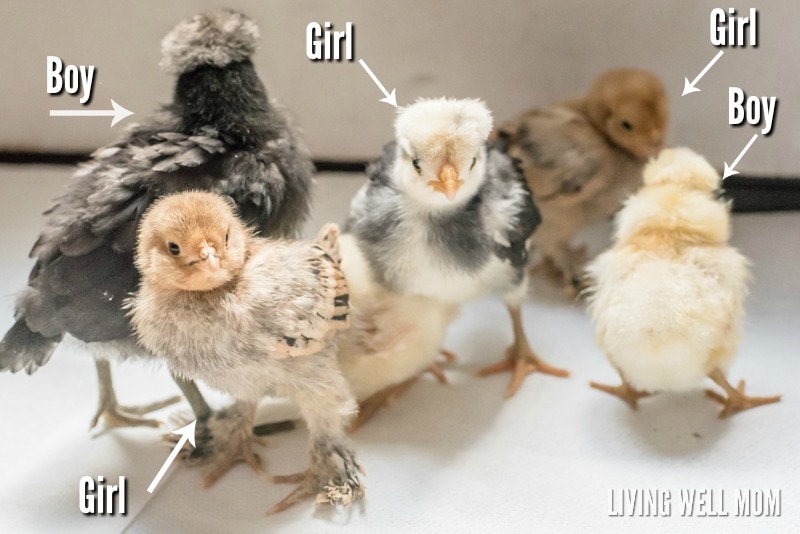 We had no idea what gender these chicks were when we got them, but there were 2 boys and 3 girls. Would you believe the fluffy yellow chick on the right grew up to be our giant boy, Smokey (see his photo farther below)?!

We all wait anxiously to see if our chicks are boys or girls. We can guess all we’d like, but as many people who raise chickens like to say, you won’t know for sure until they crow or lay an egg!

That can be anywhere from 12-30 weeks of age! Occasionally though you might have a little cockerel who makes himself known by crowing very early. We had a young Silkie start crowing at just 6 weeks of age!

For older chickens, typically 3-6 months of age, there are a few characteristics you can look for. 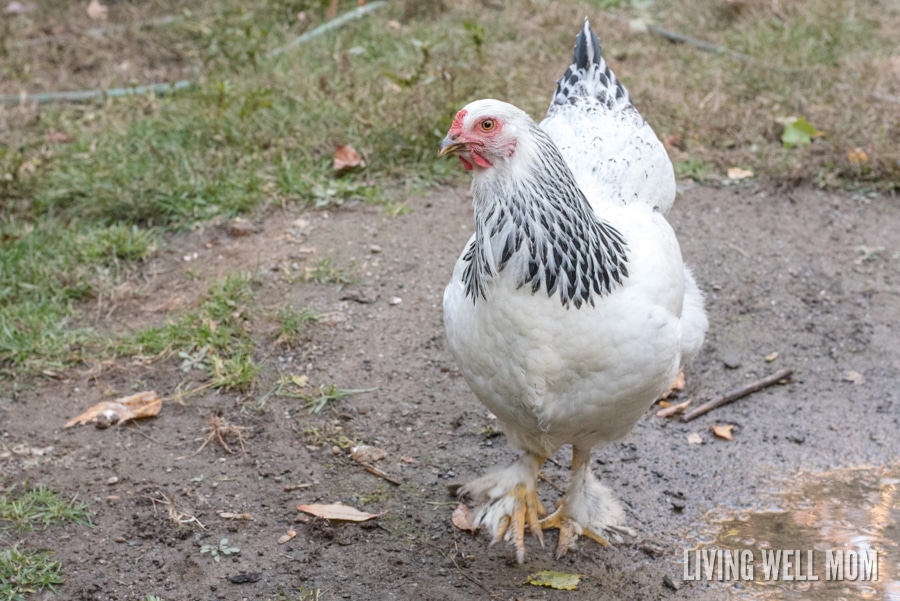 Comb and Wattles: Size and Color

The comb is the “crest” on top of a rooster or hen’s head. As chickens begin to mature, their comb will grow larger and darken or brighten in color. Cockerels usually have larger brighter combs than hens.

It’s the same thing with a chicken’s wattles – the fleshy skin that hangs from underneath the beak/neck. Males have brighter larger wattles than females.

This is Wolf, our Light Brahma cockerel, when he was very young. You can see his comb and wattles beginning to get bigger and brighten. 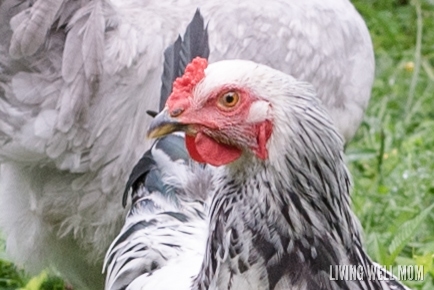 Here’s a photo I took of Wolf today. See how his comb and wattles are bigger now? Wolf is still considered a cockerel because he is 7 months old. 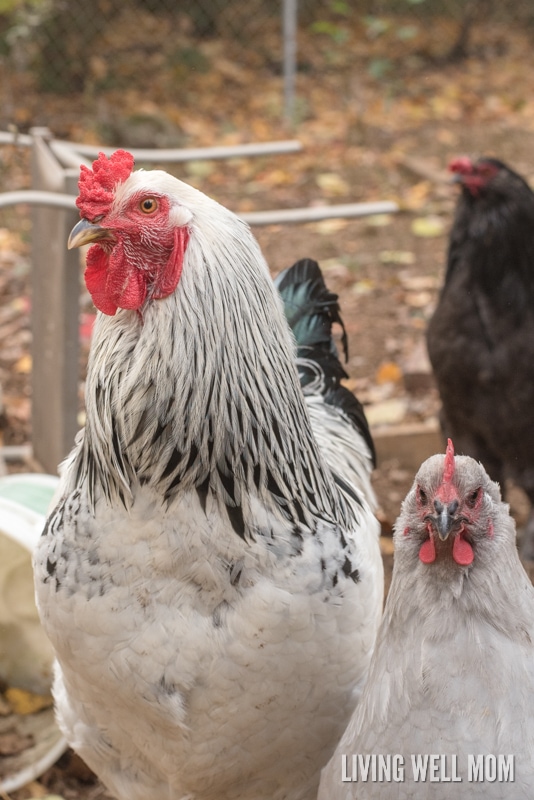 On the other hand, here is “Fireball”, our Light Brahma pullet. She is also 7 months old. Do you see the difference? 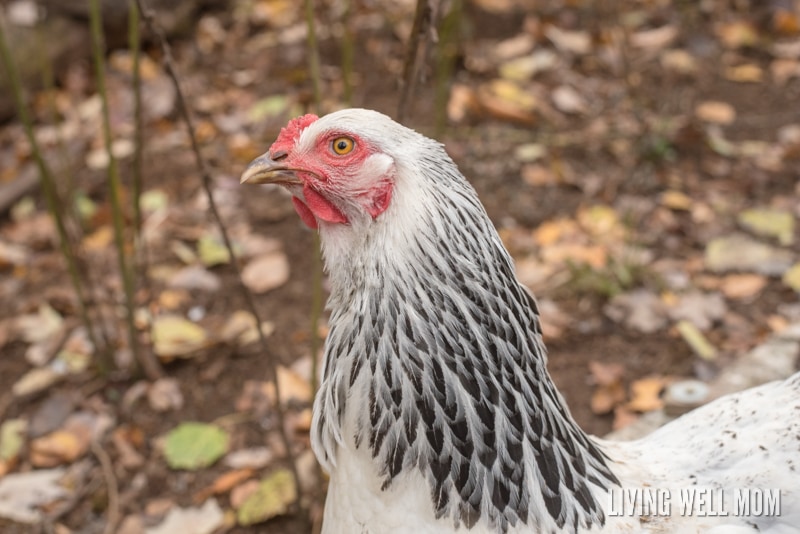 Fireball and Wolf belong to my oldest, Nathan. He named them after Minecraft. 🙂

Sometimes you will see a young chick begin to develop a larger comb earlier than the others and this is sometimes (not always) a clue as to its gender – more likely a male. 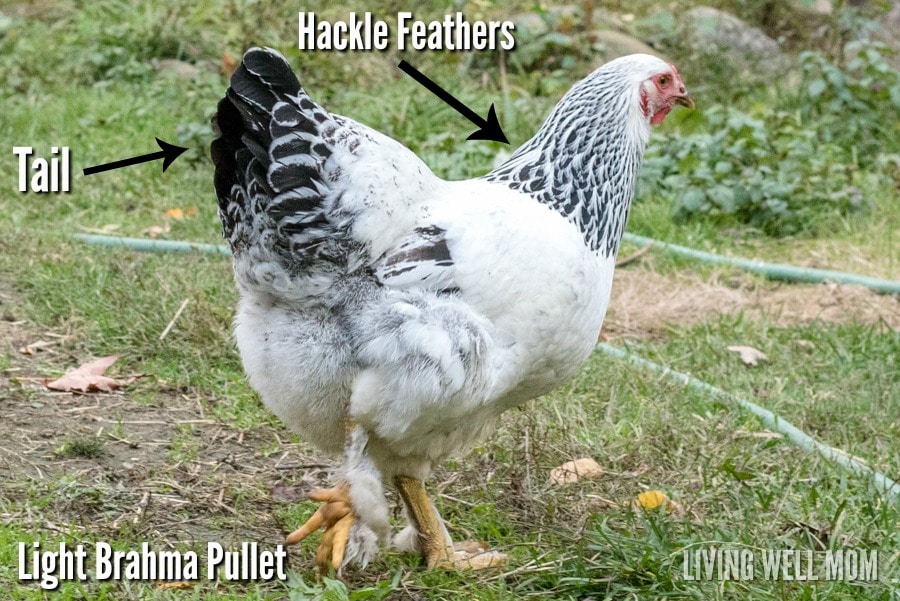 Saddle feathers are only found on the boys. These feathers grow on their back down toward their tail. They become fairly obvious once a cockerel is older.

One way to remember the difference between hackle and saddle feathers is to think of a horse saddle which goes on a horse’s back, not the neck.

Lastly, look at a chicken’s tail feathers. A cockerel or rooster’s feathers will be longer, more flowing, and generally showier. Sometimes there will be more colors, such as shiny green feathers.

Here is Wolf again. Notice the differences between him and Fireball. 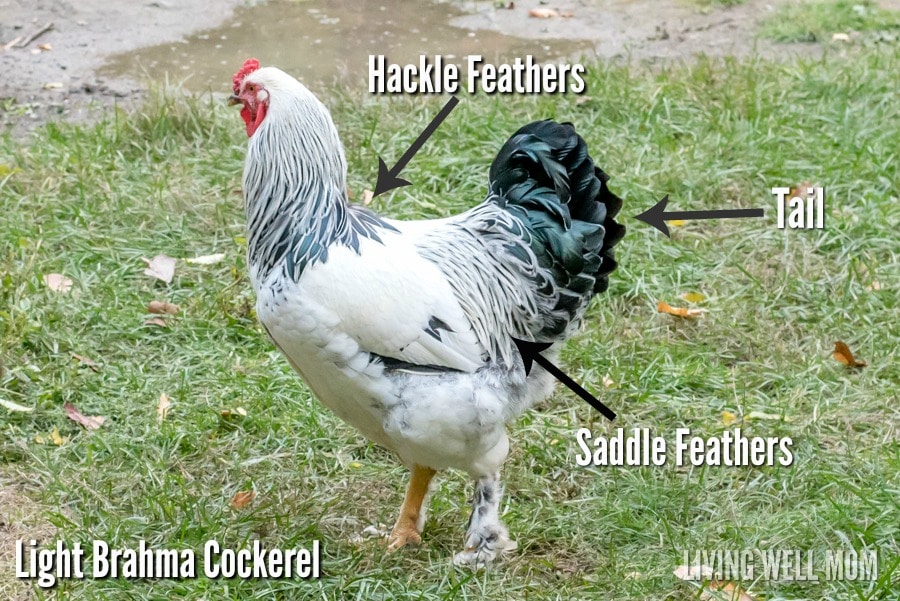 Behavior – roosters are often bolder than hens. You might notice this behavior in small chicks. As they get older, roosters will tend to “challenge” each other with raised hackle feathers.

But this behavior isn’t exclusive to the boys; even the girls “challenge” on occasion! Of course, there are exceptions too; we’ve had shy roosters and braver hens.

Posture – cockerels tend to puff out their chest and stand taller than pullets.

This is Smokey, our sweet barnyard mix (that means mixed breed) cockerel: 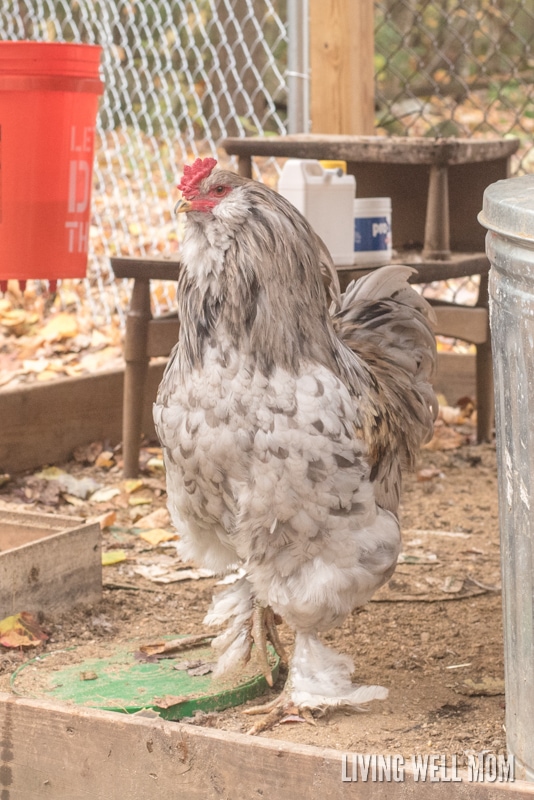 Leg Size – boys will have thicker legs than girls.

For me, this is one of the last things I consider when telling hens and roosters apart, but it is one more characteristic you might notice.

Spurs – some, not all, cockerels will develop spurs on their legs, a bony growth that grows from the inside of their legs. Spurs can be used as a defense and can be dangerous if you have an aggressive rooster. Luckily there are ways to safely remove spurs without injuring the roo.

This is Hairy Potter, my son’s Silkie rooster. (Yes he deliberately spelled it Hairy, not Harry.) Hairy does not have spurs. (Not that you can tell under all his fluff!) 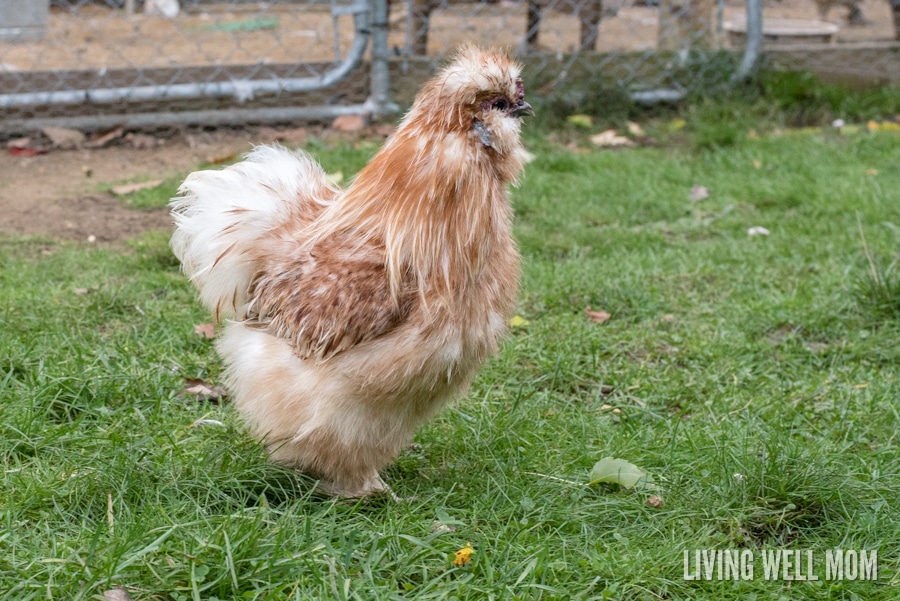 Overall, remember there’s no guaranteed way to tell the difference between hens and roosters until they are crowing or laying eggs. But these are some fun clues to consider as your chicks grow bigger and it’s always fun to play the guessing game! 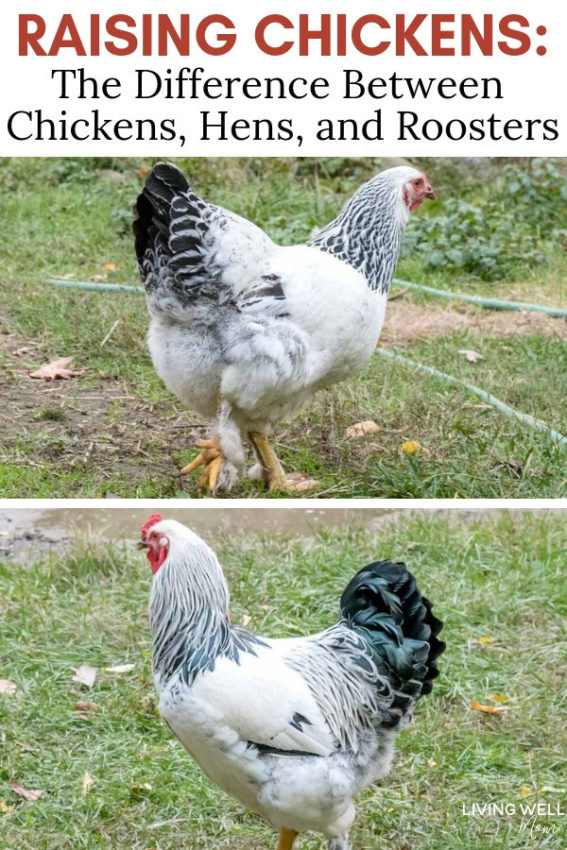 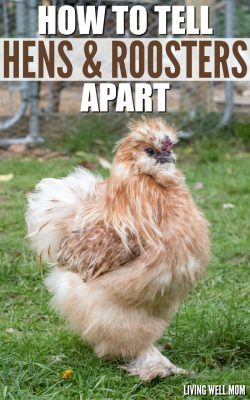