With BluApple, you can extend the useful storage life of your produce up to three times longer.
Ethylene gas is given off naturally by fruits and vegetables as a signaling mechanism in order to coordinate uniform ripening. However, once concentrated in your refrigerator or other storage areas, the presence of ethylene gas continues to speed up ripening and hasten spoilage.

The BluApple is designed to provide effective ethylene gas absorption for three months in a typical home refrigerator produce bin or storage container. The active ingredient does not “wear out”, but continues to absorb ethylene until it has reached its capacity. A One Year Refill Kit rounds out the BluApple ethylene gas management product line, allowing consumers to reuse BluApples and not add them to landfills.

Bluapple takes the technology successfully used in grocery & transportation operations for over 25 years and puts into our homes. 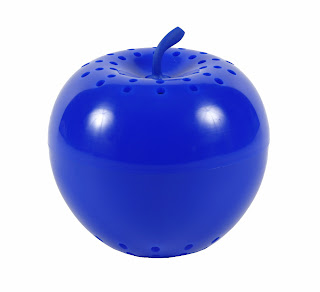 My family loves fruit and we eat a lot of it. Produce makes up a big chunk of my weekly grocery budget. And while we eat a lot, there often seems to be something that goes bad before it’s eaten. When I was offered the chance to review the Blueapple, I eagerly agreed because I knew this was something my family could really use.

I was sent the standard package of 2 Bluapples to try. It was so easy – I just opened the package and placed the Bluapple next to my fruit! The ethylene gas absorption packet was already in the Bluapple so there was no assembly required.

I put one Bluapple in my produce bin in the refrigerator with strawberries, apples, & peaches. The other Bluapple went in the fruit bowl on my counter with peaches & bananas. I was particularly interested in how it worked with my bananas because this is a fruit that never seems to last a full week for us. If our bananas aren’t eaten within 3-4 days of purchase, they over-ripen to the point where no one wants to eat them and I have to either make banana bread (which I rarely have time for) or throw out, which is such a waste. 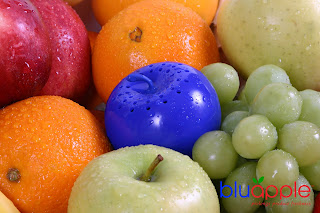 Enter: Bluapple. Nathan helped me with our little “experiment.” I put 2 bananas on one counter away from the Bluapple and 2 bananas in the fruit bowl with the Bluapple. Five days later, there was only one banana left on each counter instead of two; I couldn’t keep Emily, who is always eating fruit, from eating the second bananas! But that one banana left was enough to show that the Bluapple had worked. The fruit bowl banana with the Bluapple was slightly aging, but nothing compared to the banana without the Bluapple on my other counter which was very brown/bruised and overripe. The fruit flies that somehow found their way into the kitchen this past week with the warmer weather were very pleased with the overripe banana, but they completely left the Bluapple banana alone!

I also noticed that my peaches and strawberries and apples with the Bluapple in my fridge were less “overripe” than usual. As Nathan is our resident “scientist,” I asked his opinion about our Bluapple experiment. His conclusion? The evidence shows that the Bluapple works!

Bluapple is so sure you will be happy with their product that they offer a money-back guarantee too!

Disclosure: I received a free product from the sponsor to review. I received no monetary compensation and my opinions are my own and were not influenced by the sponsor.

Erika is a happily married mom with four energetic children. With a love for Jesus, writing, organizing, and animals, especially chickens, she stays busy and definitely does not have it all together.