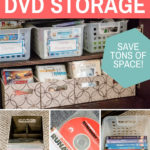 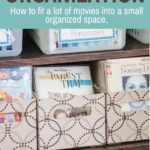 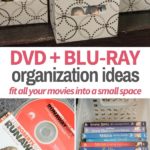 Whether you have a couple dozen or a few hundred movies, this simple DVD and Blu-Ray organization idea is the best way to store your movie collection in a nicely organized, small space, making them easy to access anytime you want.

We own a lot of movies.

I used to buys tons of DVDs, whether it was a yard sale, eBay, Black Friday deals, etc. That was before Redbox days and there were no video stores in our area; it was cheaper to buy inexpensive DVDs than go to the movie theater. 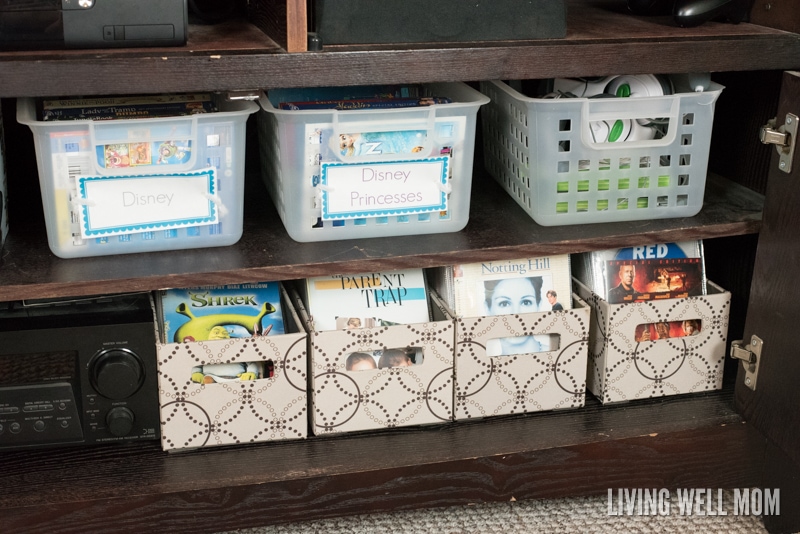 But we amassed a huge collection of DVDs. Like too many.

At one point, we purchased two large DVD cases (like bookcases, but narrower.) It worked out great, but took up so much space! If we had a media room or den, it would have been fine, but that massive DVD collection was in our bedroom. 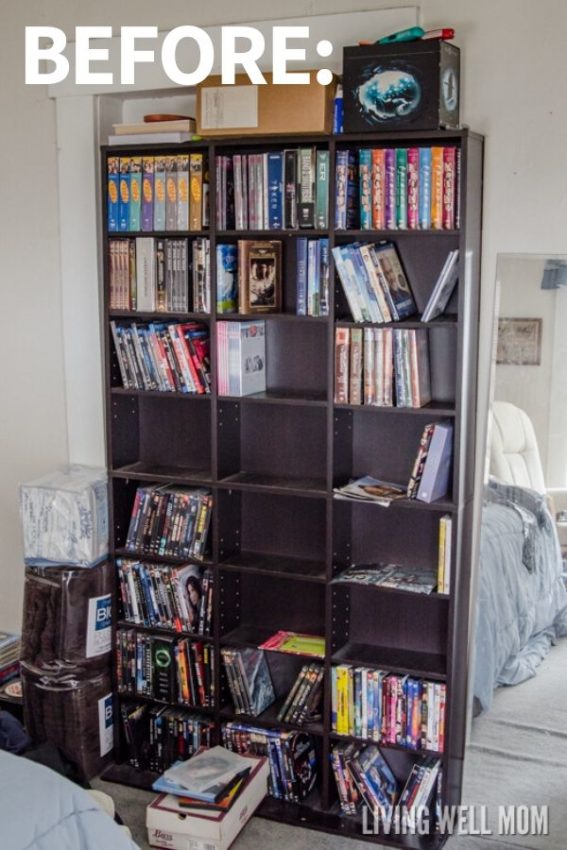 Now our entire DVD and Blu ray collections are stored neatly in our living room with this very simple DIY storage idea. Like this: 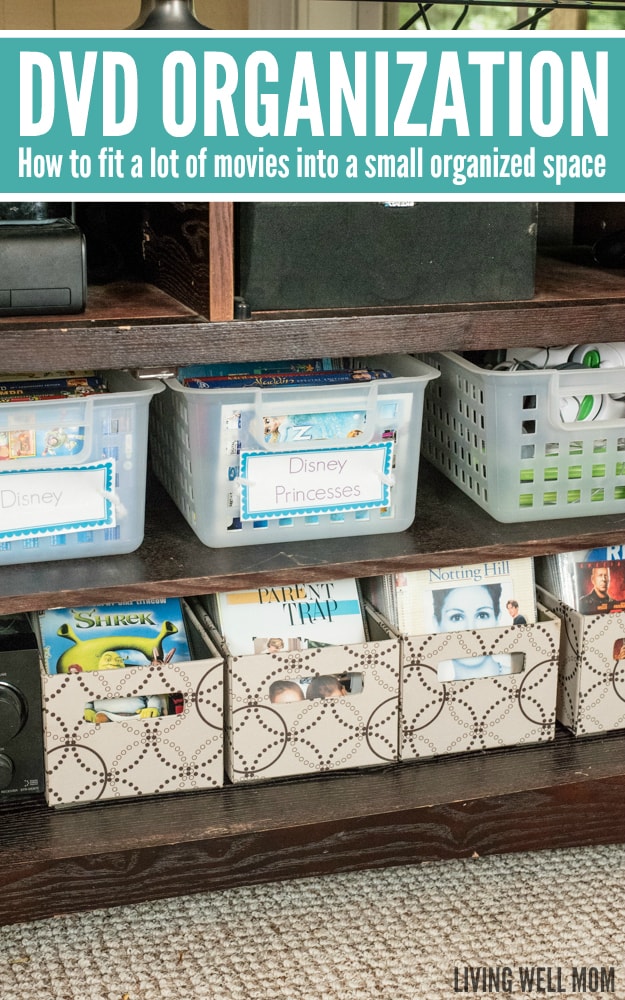 I did two things:

1) I seriously cut down down our collection by more than half. I sold a few but mostly, I gave DVDs and Blu-Rays to friends or donated them to the library or some other place.

2) I tried a few different things until I finally figured out this efficient method for DVD organization that I’m going to share with you today.

Whether you have a couple of dozen movies or a couple hundred, this idea for DVD and Blu-Ray organization will keep your movies nicely sorted into a small space both with and without cases.

It takes up so little shelf space compared to having DVDs laid out in a bookcase-type fashion and it’s still easy to scan through and find your desired movie or browse through them all.

Want to know just how much space you’ll save? 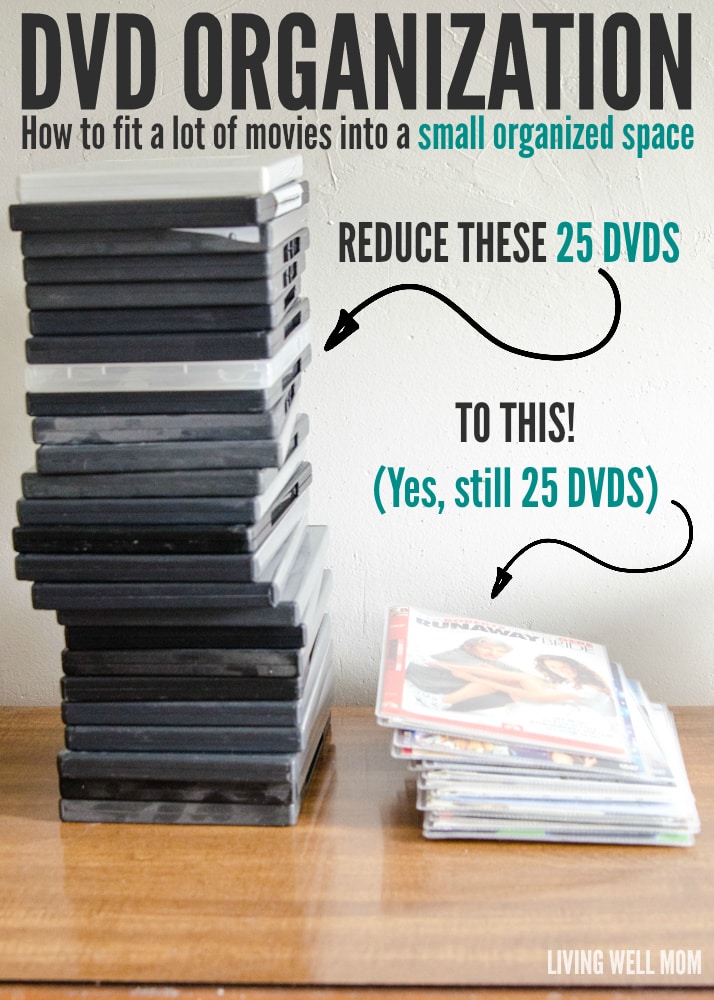 If you have more than 25 DVDs or Blu-Rays, just imagine how much room you’re going to save!

How to Store DVDs and Blu-Rays

Two things before we get started:

1) You’ll want to sort through your DVDs and sell, donate, or toss anything you don’t want to keep. No sense hanging onto that scratched-up Baby Einstein video when your youngest is five.

2) You’ll be getting rid of most of your DVD and Blu-ray CASES. (That’s the space-saving part!)

Don’t let this stop you! I was hesitant to throw away the cases before (I was almost weirdly attached to them) until I realized something:

DVDs don’t have great resale value anymore. Have you ever tried to sell them on Craiglist or at a yard sale? You’re LUCKY if you get a $1! It’s simply not worth keeping the case and taking up room under your tv or bookcase for the off-chance you might make a buck later.

Toss them or donate them.

One idea to ask yourself: have you watched this movie in the last 2 years? If not, it might be a good candidate to rehome. Or you can give yourself a temporary pile of movies that you will hold on to for say the next 3-6 months and then if you haven’t watched them, you’ll let it go.

BUT. If you have a favorite collector’s edition movie, season box set, or Disney movies (which might still have good resale value), you can still keep them with cases intact. I’ll show you how to organize those DVDs too! 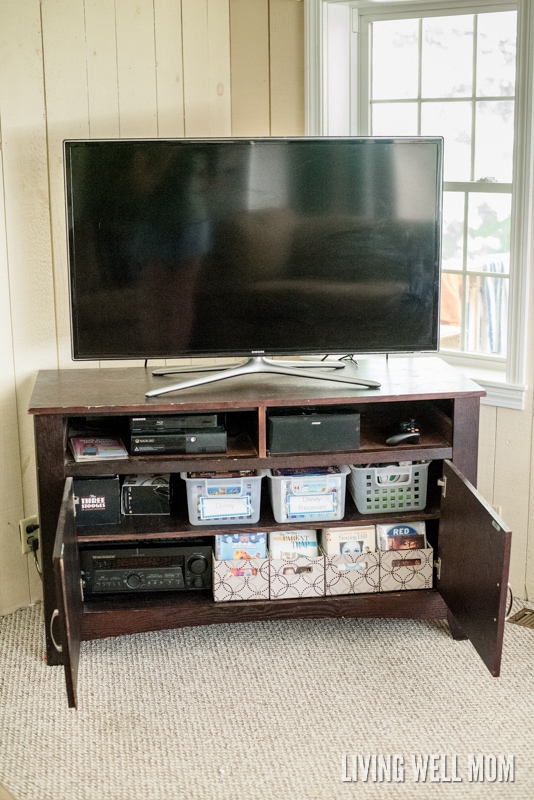 The Best Way to Store DVDs

*2020 update: the original Rubbermaid bento boxes I used in the photos here are no longer available. Boo!

Here are a couple of alternative DVD storage containers:

Here is one option that reviewers have confirmed works – get it here.

Another option – get it here.

This one is prettier, it doesn’t appear to be as solid, but the dimensions should work:

This pretty option also works if you place the movies on their sides:

I purchased several bento storage boxes and around 10 sets of movie sleeves. If you have a ton of movies like us, this system does cost some money to set up (I probably spent $100 on the movie sleeves and another $60 on Bento boxes), but it was worth every penny to have my DVDs organized so neatly and conveniently. And if you have fewer movies, it’s cheaper. (More incentive to get rid of extra movies you don’t watch!) 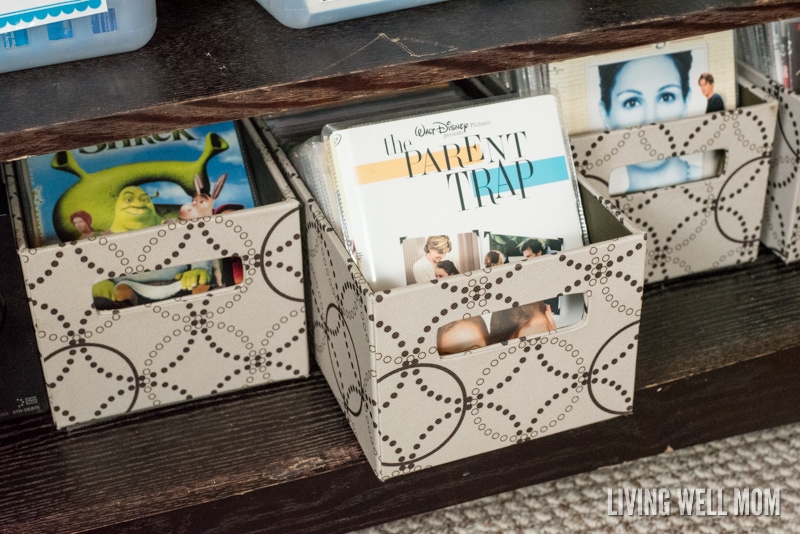 I’ve been using this DVD organization system for over 6 years now and I love it just as much as the first day I set it up. The bento storage boxes are sturdy and still going strong (even with four kids whipping them in and out.) The sleeves have lasted quite nicely too. 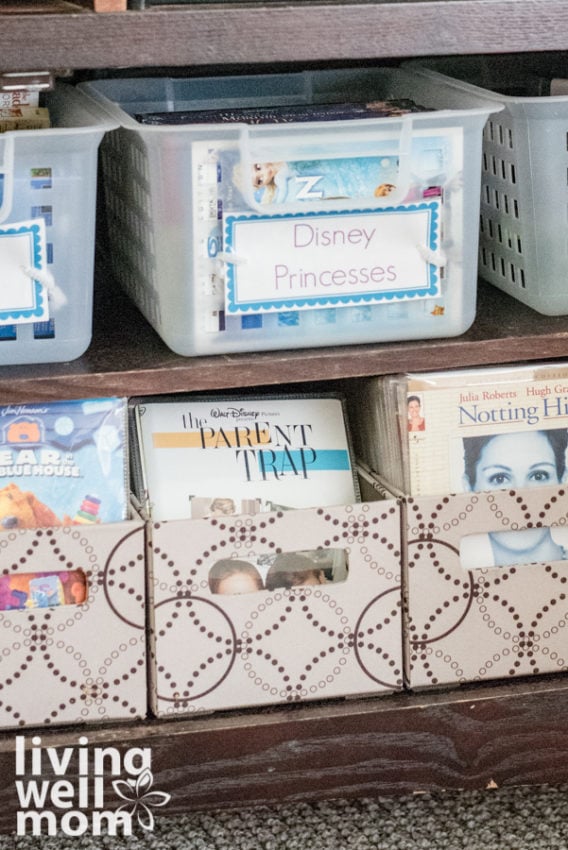 How to Set Up Your DVD & Blu-Ray System:

Begin swapping all your movies to the sleeves. Each movie sleeve has two pockets for two discs – one for the main feature and a special feature disc if you want. 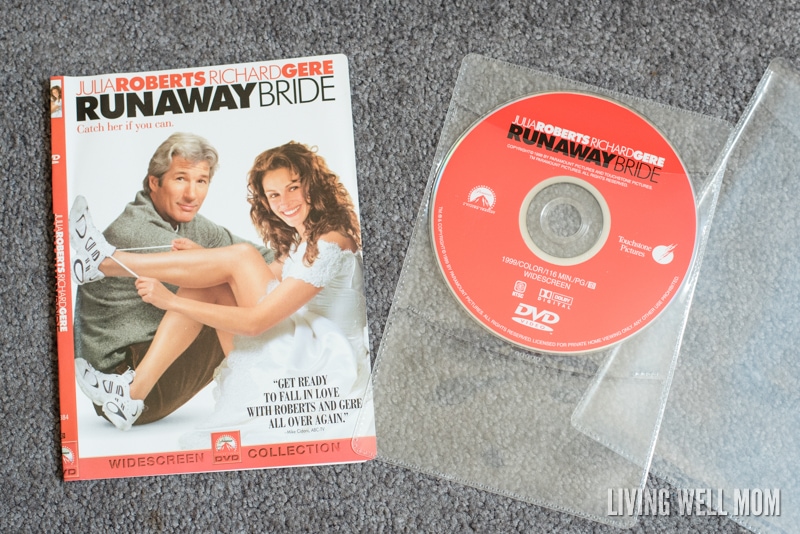 You have to fold the DVD or Blu-Ray insert in half in order to fit it into the sleeve. I’ve heard some people aren’t fond of this, but it never bothered me since I no longer need to see the title on the shelf. If folding that seam in half means saving space, I’m okay with it! 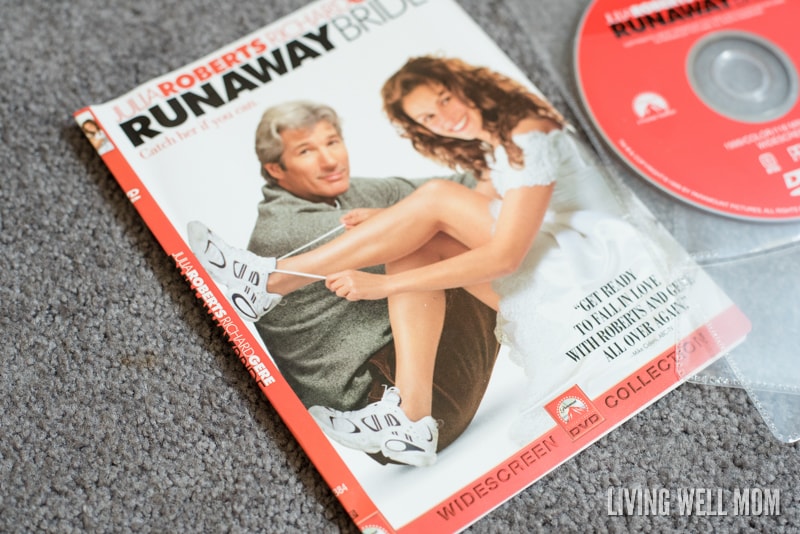 Slide the insert into the main sleeve, then slide the disc sleeve inside the middle of the insert.

Note: for blu-rays, the inserts will be shorter and while it doesn’t fill the sleeve as well, it still works. 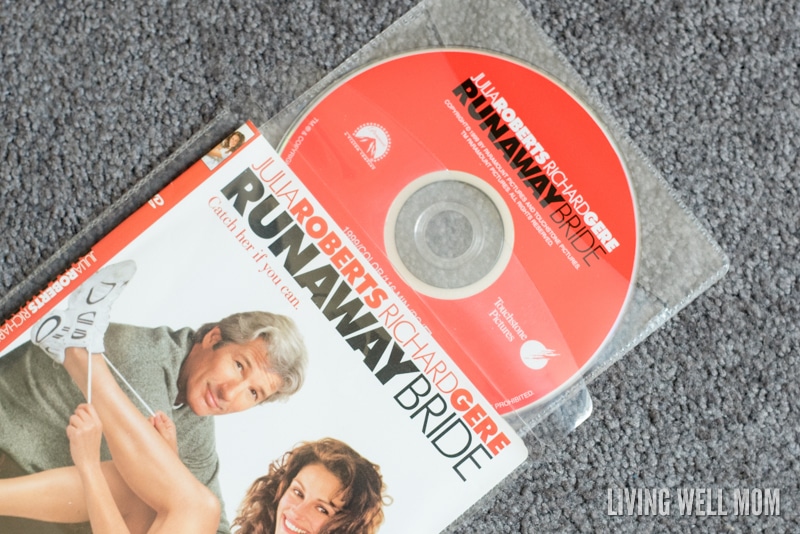 Do this for all your DVDs and Blu-Rays. If you have a lot, pop in a movie and watch while you sort DVDs.

If you’re like me, you’ll have a pile of old favorite movies you want to watch again! Organizing your DVDs is a great way to spend a relaxing, yet still productive evening! 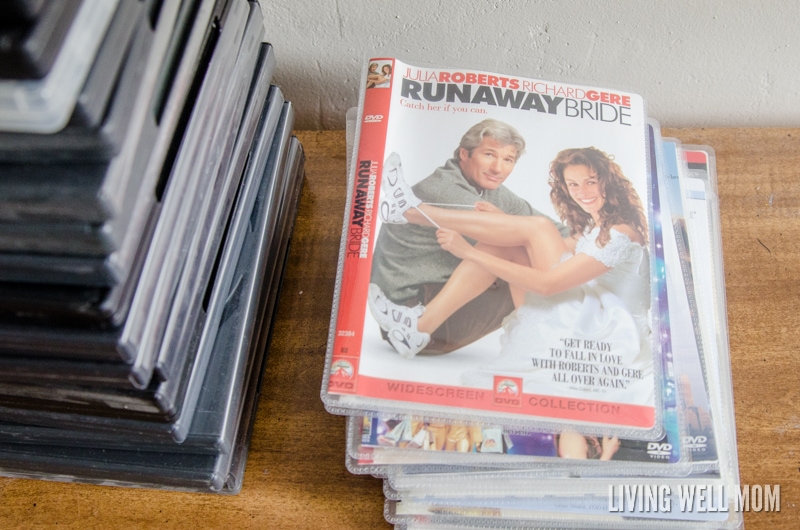 I haven’t bought any new movie sleeves since my initial purchase thanks to my new rule of thumb: If we get a new movie, an old one must go.

If you want to store a LOT of movies without buying a zillion sleeves and bins, try this simple tip: Use one sleeve to store two movies. I do this for movie series or similar styles, like Freaky Friday and The Parent Trap here. 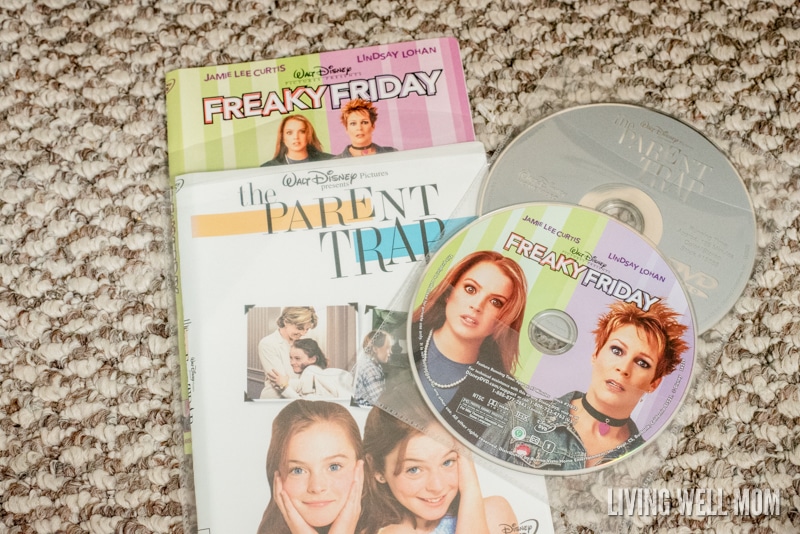 Next, sort your movies into the storage boxes.

The bento storage boxes are the perfect size for organizing DVDs. You can fit around 75 DVDs in each one and still be able to easily flip through them. Plus the pop-out dividers will keep your movies from sliding down to the bottom. 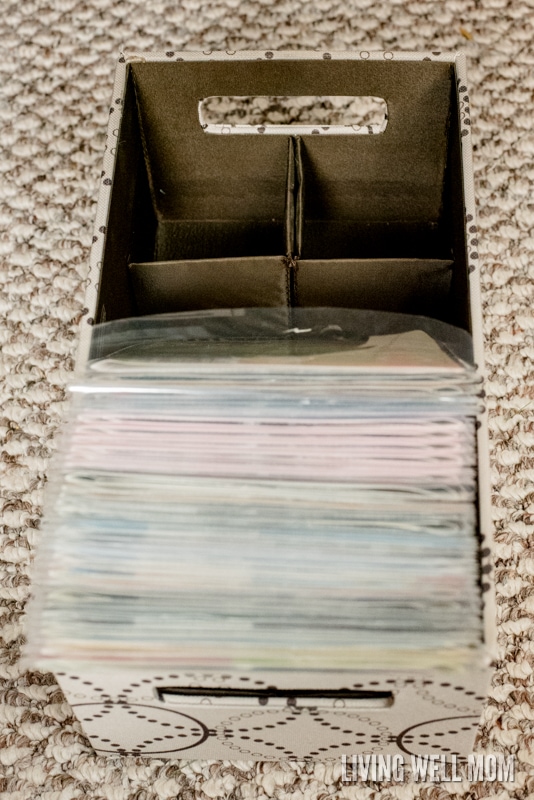 Depending on how many movies you have, you can have separate bento boxes for each movie category – kids, family, action, romance, comedy, etc. Or just have two – one for the kids and one for Mom and Dad’s movies. It’s up to you. 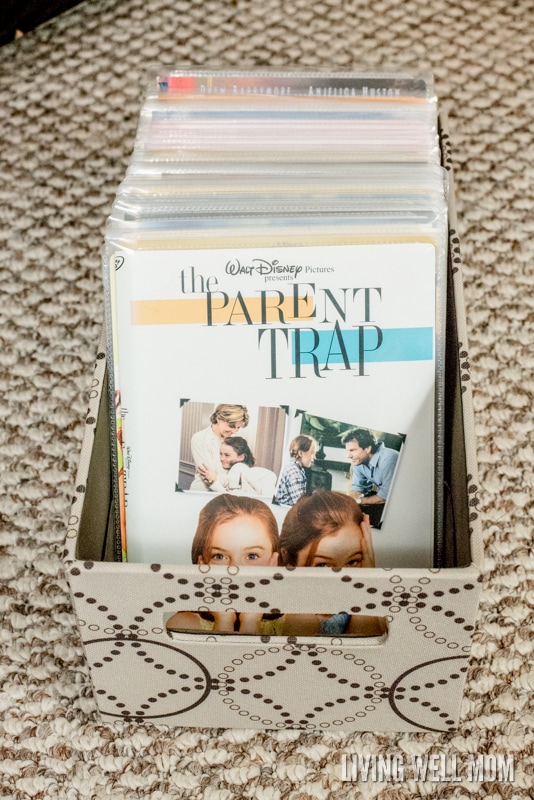 Our movies are sorted by category because we (still) have a lot and they fit nicely in our TV cabinet. I still keep a few boxed sets (my Friends collection for example) on a shelf in my closet, but the majority of our DVDs fit exactly where we want them – by our tv.

And as for the other still-in-their-cases DVDs, like Disney? I use small plastic bins (I found these at Michael’s) to store these DVDs. 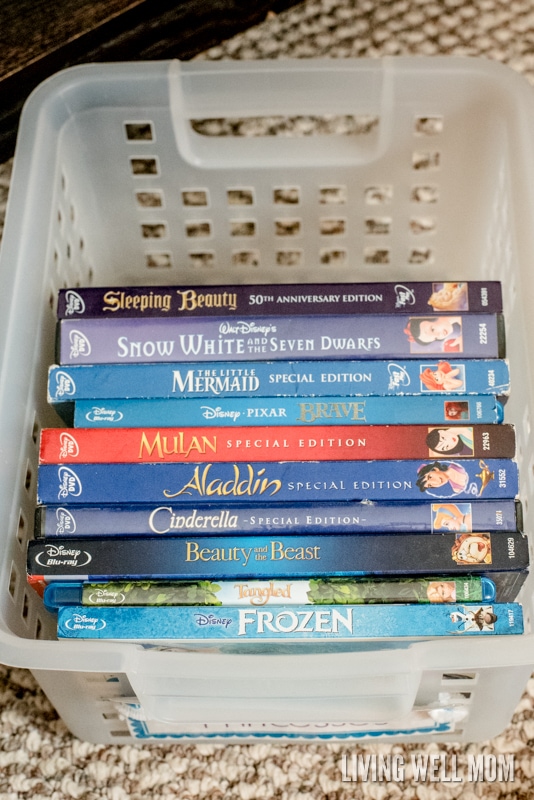 You could use the bento storage bins too, but the plastic bins seem to work better for the cased DVDs.

And that is how you organize a lot of DVDs and Blu-rays into a small space! 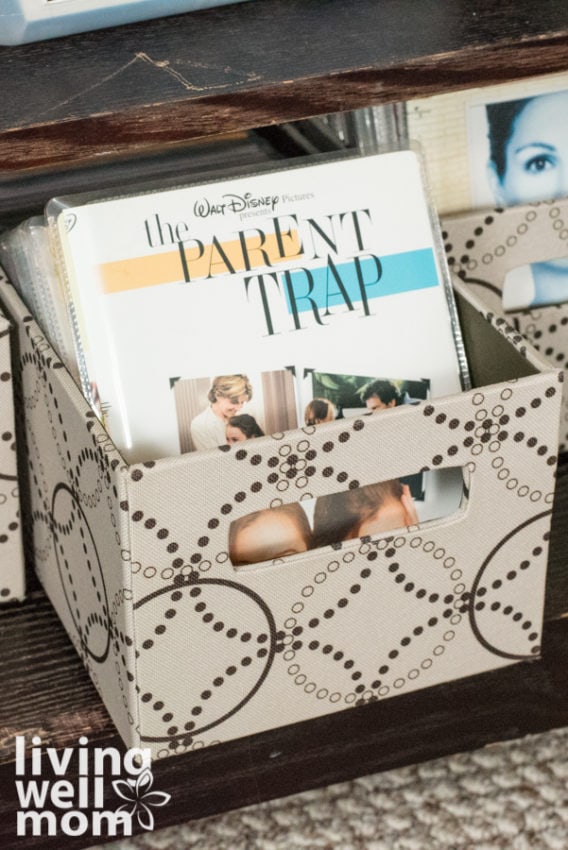 Looking for more ideas for how to organize small spaces? Check out these posts: 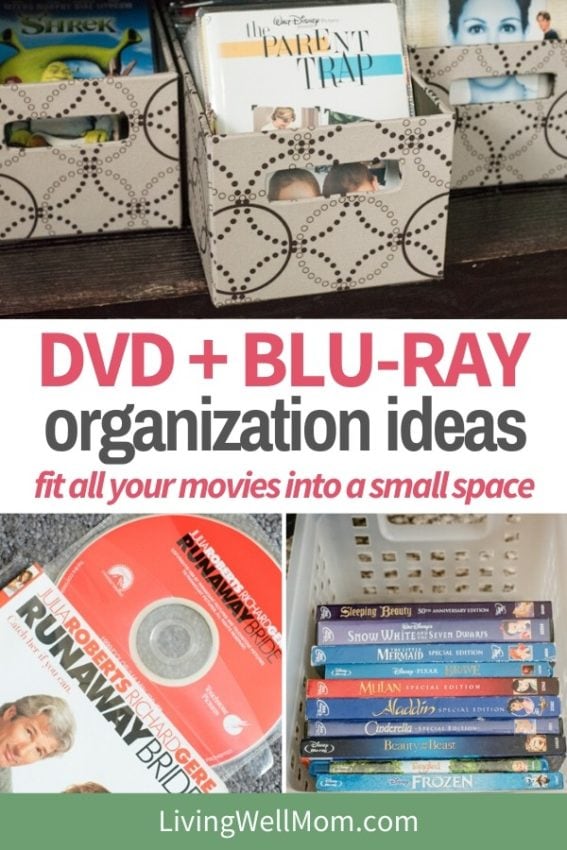