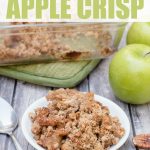 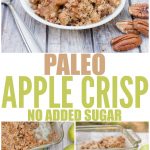 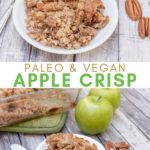 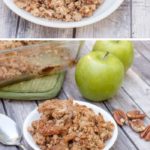 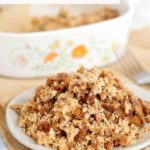 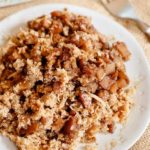 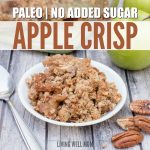 This healthy apple crisp recipe turns a classic favorite apple dessert into a healthier treat. Plus, it’s one that anyone can enjoy as it is low-carb, grain-free, gluten-free, vegan, sugar-free, paleo-friendly, etc.

Don’t be fooled, though. This recipe tastes as good as your favorite apple crumble…or better. You don’t have to feel deprived (or guilty!) when enjoying yummy recipes like this!

I love apple desserts like apple pie, but sometimes I don’t want to deal with making pie crust. Plus, the best healthy apple crisp will taste just as good as a pie (or apple cobbler) without the extra hassle or carbs. The scrumptious crumble topping delivers flavor along with a punch of fiber.

My favorite apple crisp recipe has been in my family for years, but it’s not grain-free. That’s because, like most crisp recipes, it contains oats that are not grain-free. It also has brown sugar and butter and is usually topped with vanilla ice cream.

I decided it was time to turn the best apple crisp into an equally tasty (and easy) grain-free treat. Tweaking the original recipe took some time, but I have successfully converted it into a delicious, low-carb paleo apple crisp.

The result is this delicious healthy apple crisp recipe. Let me tell you a little more. It’s:

Not only did I make one (sugar-free) version, but I added a second version, too, because some readers have commented that it’s not sweet enough.

I originally created this recipe with the intention of avoiding sugar completely. I even used green apples to keep the sugar content as low as possible. Essentially, it’s a sugar-free apple crisp minus the yucky artificial sugar sweeteners.

But since many of you aren’t avoiding sugar THAT much (and I get it – I’m no longer that strict either), I heard you. As a result, I’ve tweaked the recipe so you can enjoy this low-carb apple crisp recipe too!

This Whole30 apple crisp recipe is just as easy to make as the classic version – and it’s healthier due to fewer calories and far less sugar. It also has the bonus of added substance by using almond flour – a much more filling, nutrient-packed option – instead of regular flour.

In other words, this guilt-free, low-carb, healthy apple crisp has all the goodness of an apple pie without the need for a crust or the use of unwanted grains, dairy, or sugar (depending on which recipe you use)!

By the way, the “secret” ingredient my family has used for years in apple crisp and pies? Vanilla extract! I’ve grown up always using vanilla in apple desserts, but over the years, I’ve run across many people who don’t, so I do recommend it!

I mentioned that I developed two different healthy apple crisp recipes, and I’m including both in this post. You can print one or both out if you scroll down to the bottom of this post.

Here’s a quick rundown of the ingredients for each version so you can decide which recipe works best for you.

This version is gently sweetened with non-refined sugar (coconut sugar, erythritol, &/or maple syrup.) It contains:

If you’re serious about avoiding sugar and sweeteners in your diet, this one is for you! It contains everything in the recipe above except for the added sugar (there aren’t even natural sweeteners). You can even use Granny Smith apples for a lower-sugar apple.

NOTE: This version is not as juicy as most other apple crisps (it’s difficult to get a very juicy granny smith), but it’s truly a guilt-free paleo dessert.

Here are a few questions I see readers ask regularly. If you have a question but don’t see it answered below, please drop it in the comments!

What type of apples is the best for making apple crisp?

If you prefer a juicier apple crisp (and who doesn’t), you can use your favorite Cortland, Macintosh, Honeycrisp, Gala, Jonagold, Pink Lady, or Fiji apples. Really, you can use any apples you prefer for baking.

For the sugar-free version, I recommend using Granny Smith apples just because they have lower sugar content. However, they won’t be as juicy as some of the other options I listed above.

How can I make apple crisp gluten-free only?

It already uses gluten-free flour. All you would need to do is make sure you use gluten-free oats.

NOTE: Oats are naturally gluten-free, but they become cross-contaminated through the harvesting and production process, so you have to buy oats specifically labeled gluten-free.

Can I use oats in this healthy apple crisp?

One common question I’ve been asked about this recipe is, “can I use oats?” The answer is: that it depends on your dietary preferences.

If you follow the paleo diet, which is grain-free, you should not use oats because oats are grains.

However, if you’re NOT paleo or you are and are willing to “cheat” (because oat-covered apple crisp is just SO good), check out my gluten-free apple crisp recipe here that DOES use oats.

Is this paleo apple crisp crunchy?

No, it’s not. If you use enough nuts, it adds more substance to it that sort of simulates a crunchy texture. Unfortunately, I was not able to figure out a good way to keep the almond flour mixture crunchy. But it’s still yummy!

If you DO want the crunch and don’t have to avoid grains, my original apple crisp recipe does have a nice crunchy oat topping you might want to try.

The sugar-free healthy apple crisp recipe served me well when I went through a sugar detox and avoided sugar for a few months.

How To Make a Healthy Apple Crisp

This is a healthy apple crisp recipe that’s grain-free, gluten-free, dairy-free, low-carb, and vegan. It is lightly sweetened.

Chop or slice your apples into small pieces, then toss them together with the cinnamon, nutmeg, coconut sugar, and vanilla.

Dump the mixture into a square baking dish.

Spoon the pecan coconut mixture over the chopped apples.

Bake for about 25 minutes, covered. Then uncover and bake for 15-20 minutes longer until the mixture is starting to bubble.

Remove from the oven and let cool before serving.

Whichever version of this Paleo Apple Crisp you prefer, I hope you love it as much as we do! Enjoy!

If you can’t get enough apples, check out these other popular recipes too! 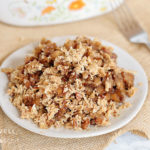 Preheat your oven to 400 degrees.

Mix the almond flour, chopped pecans (you can substitute other chopped nuts if you prefer, such as walnuts or almonds), 1/3 cup coconut sugar, and the coconut oil. Softened coconut oil will work the best, but you can use melted if you can’t get it softened. This almond flour mixture will clump together.

Spoon on top of the sliced apple mixture – spread it about as you can, it doesn’t have to cover the apples perfectly. Optional: drizzle 2 tbsp maple syrup or honey over the almond pecan mixture.

Bake for 20 minutes covered, then another 10-20 uncovered. The apples should be somewhat soft (not mushy) and beginning to bubble when done.

How To Make Paleo Apple Crisp #2 (The Sugar-Free Version)

This version is made the same way as the recipe above, but it’s not sweetened at all. 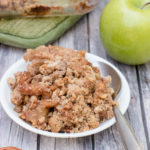 Preheat your oven to 400 degrees.

Core, peel, and thinly slice the apples. Toss the apples with the lemon juice, 2 tsp vanilla extract, 2 tsp cinnamon, and nutmeg. Dump into an 8×8″ baking dish.

Melt the coconut oil, then mix in the almond flour, swerve or erythritol if desired, pecans, shredded coconut, and 1/2 tsp cinnamon. Sprinkle over the apples, then sprinkle the remaining 1 tsp vanilla extract over everything.

Bake at 400 degrees for 20 minutes covered, then another 10-20 uncovered. The apples should be somewhat soft and bubbling when it’s finished.